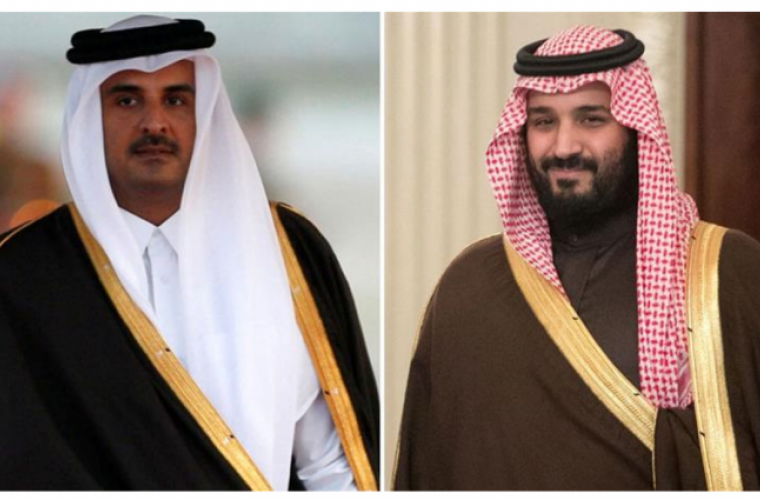 [EDITOR'S NOTE: The below breaking news has been directly shared from Al Jazeera.]

Saudi Arabia says plans to hold talks with Qatar have been suspended, shortly after the emergence of reports that a phone call between Qatar's Emir and the Saudi Crown Prince hinted at a potential breakthrough in a major diplomatic crisis in the Gulf.

The call on Friday between Qatar's Emir Sheikh Tamim bin Hamad Al Thani and Saudi Crown Prince Mohammed bin Salman was the first official contact between Doha and Riyadh since the start of the crisis more than three months ago.

In the phone call, which was reported by state media from both countries, the two leaders expressed a willingness to discuss an end to the rift.

However, there seems to be a dispute over protocol - with some reports pointing out to Qatar News Agency's (QNA) apparent failure to mention that it was Doha that had initiated the call.

In its report about the two leaders' call, QNA said that the phone conversation had been coordinated by US President Donald Trump.

In the phone discussion, Sheikh Tamim and Mohammed bin Salman "stressed the need to resolve this crisis" through dialogue "to ensure the unity and stability" of the Gulf Cooperation Council (GCC), said QNA.

The Qatari emir welcomed a proposal by the Saudi crown prince to assign two envoys to resolve the dispute "in a way that does not affect the sovereignty of states", the Qatari news agency added.

On June 5, Saudi Arabia, the United Arab Emirates, Egypt and Bahrain severed relations with Qatar and imposed a blockade against it, accusing Doha of funding "terrorism". Qatar has vehemently rejected the allegations as "baseless".

On June 22, the group issued a 13-point list of demands, including the shutdown of Al Jazeera, limiting ties with Iran, and expelling Turkish troops stationed in the country as a prerequisite to lifting the blockade. Doha rejected all the demands, denouncing them as attempts to infringe Qatar's sovereignty.

In what appeared to be a possible breakthrough, Saudi state news agency SPA initially issued a statement confirming Friday's phone conversation, saying that Sheikh Tamim had called Mohammed bin Salman and "expressed his desire" to discuss the demands of the four blockading countries.

"The details will be announced later after the Kingdom of Saudi Arabia concludes an understanding with the United Arab Emirates, the Kingdom of Bahrain and the Arab Republic of Egypt," it added.

But SPA later issued a second statement, citing an unnamed official at the ministry of the foreign affairs as saying that what QNA had published earlier in its report about the phone call was a "distortion of ... facts".

"The Kingdom of Saudi Arabia announces the suspension of any dialogue or communication with the authority in Qatar until a clear statement is issued clarifying its position in public," the second statement added.

The latest row came shortly after the White House issued a statement saying that Trump had spoken separately earlier on Friday with the Qatari and Saudi leaders, as well as UAE Crown Prince Sheikh Mohammed bin Zayed Al Nahyan.

In his phone calls, Trump told the Gulf leaders that unity among Washington's Arab allies was essential to promoting regional stability and countering the threat of Iran, the statement added.

"The president also emphasised that all countries must follow through on commitments from the Riyadh Summit to defeat terrorism, cut off funding for terrorist groups, and combat extremist ideology," it said.

Al Jazeera's Kimberly Halkett said there was "tremendous optimism" in Washington "over the fact that the White House had successful coordinated the first official contact" between the GCC partners.

Yet, it was what happened after the phone call that "seems to be what has caused so much consternation", said Halkett, reporting from Washington, DC.

"The fact that there is an accusation by Saudi Arabia that Qatar's news agency misrepresented the facts, failing to report - in the eyes of the Saudis - that it was the emir of Qatar who initiated the phone call to Saudi Arabia’s crown prince."

Mohammed Cherkaoui, a professor at George Mason University, said he was still optimistic about the call.

"I remain optimistic since there was a major turning point in the conflict itself, and I think now that we're watching the end of the escalation process that started three months ago," Cherkaoui told Al Jazeera.

"The latest news now that there is this resistance - this is normal because conflict escalation comes fast and mediation is very slow by its nature," he added.

On Thursday, Trump held talks with the emir of Kuwait, who has been acting as a mediator to defuse the crisis, at the White House.

Speaking at a joint press conference after their meeting, Trump said that he supported Sheikh Sabah Al Ahmad Al Sabah's mediation efforts, but added that if that did not manage to resolve the Gulf crisis, he would be "willing to be a mediator".

Later on Thursday, Trump also held a phone conversation with Sheikh Tamim. In the call, the Qatari emir expressed Doha's position on resolving "differences through constructive dialogue that does not affect the sovereignty of states", QNA said.