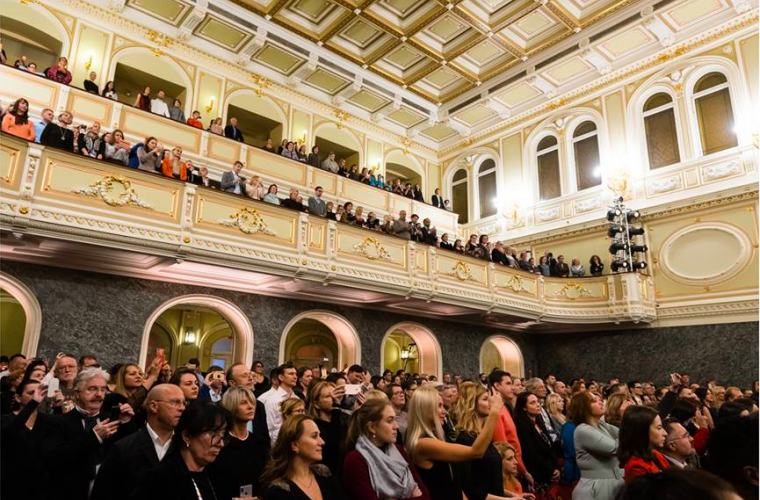 Qatar's cultural activities continued within its participation in the 7th St. Petersburg International Cultural Forum in Russia.The State of Qatar is the guest of honor at this forum for the first time. It is within the context of the Qatar Russia 2018 Year of Culture during which many joint events will be held throughout the year in order to strengthen the future partnership and ties between the two countries and their peoples, reported QNA.

HE Minister of Culture and Sports Salah bin Ghanem Al Ali said that Qatar, like other countries, has a unique culture and that all its individuals believe in the value of diversity and multiculturalism, pointing out that there are more than 150 nationalities in the State of Qatar, which reflect the culture of coexistence among nations.

The Qatar Philharmonic Orchestra's concert, which was held on Thursday at the St. Petersburg Forum under the theme "28 different cultures, one tune", reflected the cultural diversity and contributed to the creation of a single cultural edifice representing common values and one human civilization.

He pointed out that the issue of cultural diversity in the State of Qatar is not a slogan but a reality that is being promoted, adding that the State of Qatar is hosting the Doha International Center for Interfaith Dialogue, which contributes to building dialogue among different civilizations and cultures, and Qatar Foundation for Education and Science and Community Development, which is an example of promoting knowledge and cultures through its global universities and colleges, where more than 3,000 students from different cultures are working to deepen mutual understanding of cultures.

His Excellency also touched on Modern Art Expo organized by Qatar at the forum where artists' participations in the exhibition brought together Qataris and residents alike. A visitor to Qatar Museums or the Cultural Village-Katara understands the value of culture in the country as it opens the horizons of knowledge and brings people closer, he said.

As for the activities of the Doha Film Institute (DFI), he stressed the importance of cultural exchange among artists in the world, adding that the DFI also provides an opportunity to exchange cultures among all film professionals around the world to produce and showcase their films at the Ajyal Film Festival.

HE the Minister of Culture and Sports said that Qatar is hosting the World Cup 2022, saying this event is a cultural challenge and pointing out that Russia has already hosted this event and overcome this challenge due to its recognition of the value of cultural diversity. This is reflected in the 7th International Cultural Forum in the city of St. Petersburg.

His Excellency said that Qatar is seeking to make the World Cup 2022 a venue that makes cultures unite peoples by dealing with the thousands of fans coming to our country from different countries of different cultures, which will create a public space for cultural dialogue among all peoples as it promotes peace in the region in the Middle East and in the World.

Concluding, HE the Minister thanked the forum's organizers for providing this valuable opportunity to the State of Qatar and the countries of the world, adding the forum's sessions and meetings are the best way for communication and convergence of civilizations.

HE Minister of Culture of Russia Vladimir Medinsky greatly admired the Qatar Russia 2018 Year of Culture, pointing out that despite the cultures differences between Qatar and Russia, it contributed largely to the rapprochement between the two countries.

Medinsky cited the concert of the Qatar Philharmonic Orchestra as the best example, adding the concert embodied through the national anthem of the State of Qatar the highest meanings of common cultures when the Qatari artist Fahd Al Kubaisi combined the Arabic and Russian languages, as well as in one of the Qatari national songs that combined both Arabic and Russian alphabets. Through this, he gave an example of understanding and friendly rapprochement among peoples, he said.

The concert of the Qatari Philharmonic Orchestra was held last night for the first time in Russia as part of the Qatari activities in the 7th St. Petersburg International Cultural Forum entitled "28 different cultures, one tune."

The concert also featured the national anthem of the State of Qatar in an atmosphere of interaction from the Qatari and Russian audiences with the Qatari artist Fahd Al Kubaisi, who impressed the audiences when he combined Arabic and Russian in his performance of some Qatari songs.

The Qatar Philharmonic Orchestra, a member of Qatar Foundation for Education, Science and Community Development, performs and promotes western and Arabic music in order to inspire the children and adults of Qatar and the Arab world to create and enjoy music. (QNA)

The Love Of Books