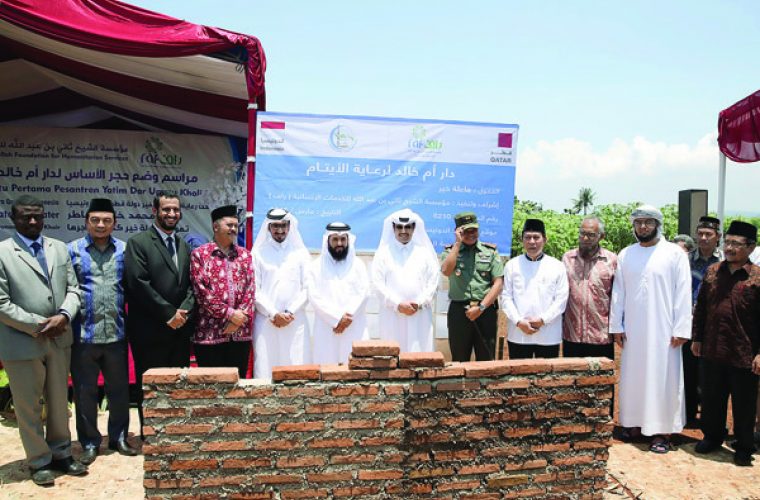 A Qatari woman has donated over QR5.3m to Sheikh Thani Bin Abdullah Foundation for Humanitarian Services (RAF) to build a big house for orphans in Sukajaya, Indonesia.

The project ‘Sheikha Umm Khalid for Orphans’ Care’ is being developed in an area of 10,000 square metres with a capacity to accommodate 350 orphan children.

The project is being executed by RAF in collaboration with a local partner Al Sila Charity Organisation in Sukajaya village of Prakerta province at West Java.

The foundation stone for the project was laid last week.

The house will comprise nine buildings, including a 14-classroom school, a big library, a computer room and 16 fully-furnished residential rooms.

The facility will also have a mosque, a health clinic, a big kitchen with dining hall. Three buses will be provided to serve the orphan children. The house will provide complete services like education, health, social and entertainment facilities, said Dr Al Qahtani.

It is not the first project if its kind, as RAF has built several houses for orphans in parts of Indonesia, he added. The project is expected to be completed in 18 months, said Ali bin Hussain Al Sadi, President, Al Sila Charity Organisation.

It will accommodate 350 orphans from the village of Sukajaya and neighbouring areas.

“We executed several social and development projects with the help of RAF in several parts of the country. An orphan house with the capacity of 100 children was opened last year,” said Al Sadi. “We have been looking for past several years to have an orphan house in our locality. The land was donated by the heirs of Al Haj Mohamad Younis as per his will he had made before his death.

“It was decided to build an orphan house as there are a lot of orphan children. But the problem was to find funds to built the facility. We applied to RAF and got a positive response. We were told that a Qatari woman has extended a helping hand to build the facility,” said Bakhtiyar Naser, a local official. (Source)