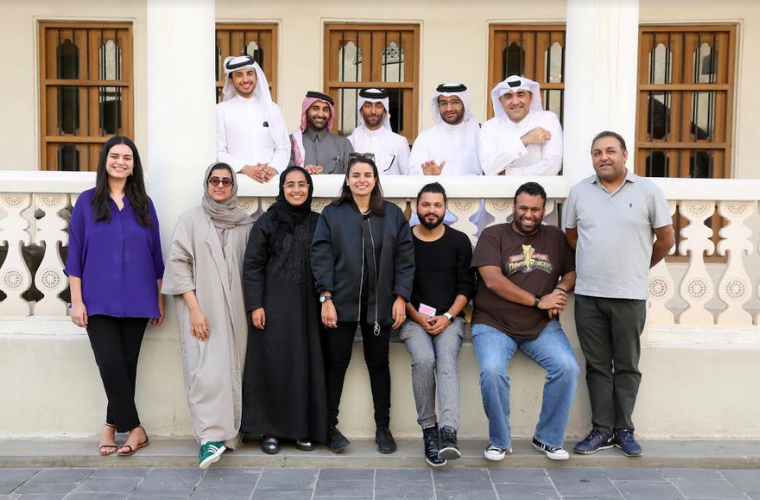 Talents based in Qatar today highlighted the role that Qumra, the industry event by the Doha Film Institute, plays in opening new doors of opportunity for their projects, especially in facilitating networking opportunities with international film experts.

At a special session, directors and producers of projects by Qataris and those who call Qatar home, applauded the initiative for making a tangible difference to their projects covering all aspects of film production – from script consultation to networking and international film festival outreach.

The third edition of Qumra has chosen 12 projects by Qatar-based talent including five feature narratives and seven shorts that are currently in development. The line-up includes three projects supported through the Institute’s Qatari Film Fund.

Additionally, five films by Qatari directors were screened in the New Voices Shorts programme of Qumra, all of which were also supported by the DFI through year-round initiatives. These included: Kashta by A.J. Al Thani; I Have Been Watching You All Along by Rawda Al-Thani; Turtles Are Always Home by Rawane Nassif; RED by Kholood Mohammed Al-Ali and Our Time Is Running Out by Meriem Mesraoua.

Fatma Al Remaihi, Chief Executive Officer of the Doha Film Institute, said: “I am exceptionally delighted with the projects by our talented emerging filmmakers in Qatar. These films represent the voices of our community by our community. They present different perspectives – and highlight the creative evolution and growth of our filmmaking community.

“In many ways, the screenings exemplify the Doha Film institute’s work year-round in nurturing emerging talents from Qatar and the wider region. We are setting the platform for a credible, strong and sustainable regional film industry, through training and development programmes, film financing initiatives including Qatar Film Fund and DFI Grants and film exhibition platforms of Ajyal Youth Film Festival and Qumra.”

Rawda Al Thani’s short Reem Planted a Flower is a Qumra Project; she said: “It is amazing to have this opportunity to develop my film through Qumra. The workshops and Master classes helped me have better understanding on filmmaking. I started my journey to films in college where my colleague at the Northwestern University in Qatar and I worked on short films. I look for local themes from our culture and take it as a story for my films.”

Reem Planted a Flower by Rawda Al-Thani (Qatar) depicts a textbook example of a well-behaved schoolgirl who defies the omnipresent voice of the narrator to play with a dog. Another short by Rawda, I Have Been Watching You All Along was also screened in the New Voices Shorts programme at Qumra.

Mahdi Ali Ali’s Feature Narrative project under development, iPhone Memory, presents three stories that intersect in Paris – about a Frenchman, who battles cancer while his wife wants an abortion. He said: “This is a humanitarian story that reflects daily life of people who live around us. The support from DFI and Qumra is very important to make a film of high standards. Qumra is a rare chance to have the mentorship of such experts to help you move to the next level.”

Fahad Al-Kuwari, who is making a short film Angels, Spiders and other Miserable Creatures, said: “It is very important for us as filmmakers to interact with experts and industry professionals. Qumra serves as a productive time spent with all colleagues as we share insights and experiences. Thanks to Qumra, we are now able to curate our projects in a better way.” The film portrays a couple who pray for a miracle, and God sends them an angel. What will they do with it?

Selective Mutism by Khalifa AlMarri tells the story of a young man caught up in various incidents of deception, intrigue and murder. He said: “This is not our first experience in filmmaking; we had learnt a lot from our previous project. I am proud to be part of this experience. In the future we look to be part of international festivals.”

In all, Qumra 2017 has 34 projects from 25 countries for mentoring through Masterclasses and networking opportunities. Directors and producers attached to 18 narrative feature films, 7 feature documentaries and 9 short films will participate in the six-day programme to until March 3 to 8 at Souq Al Waqif and the Museum of Islamic Arts.

Today (Monday, March 6), Qumra Master Rithy Panh will lead his Master class at 10.30 am while Modern Masters screening of Qumra Master Asghar Farhadi’s About Elly (Iran/2009) will be at 7 PM. The Qumra Talk ‘On Writing and Producing Animation with Mike Reiss’ of The Simpsons will be held at 3 PM. Visit www.dohafilminstitute.com for online and in person ticketing details for the screenings.

Qumra hosts leading international filmmakers, producers, industry experts and professionals, for intense brainstorming, knowledge-sharing and nurturing sessions with talents associated with 34 films from 25 countries. Directors and producers attached to 18 narrative feature films, 7 feature documentaries and 9 short films are participating in the event being held until March 8 at Souq Al Waqif and the Museum of Islamic Arts.

New this year are the Accredited Delegates Programme, developed for professionals from diverse backgrounds which will allow 100 local and regional delegates to access more opportunities and be a part of the platform for discovery, and ‘Qumra Talks’, a series of three specially curated discussions that gathers leaders from the technology, film, TV and online worlds to share their insights on trending topics impacting the international film industry.