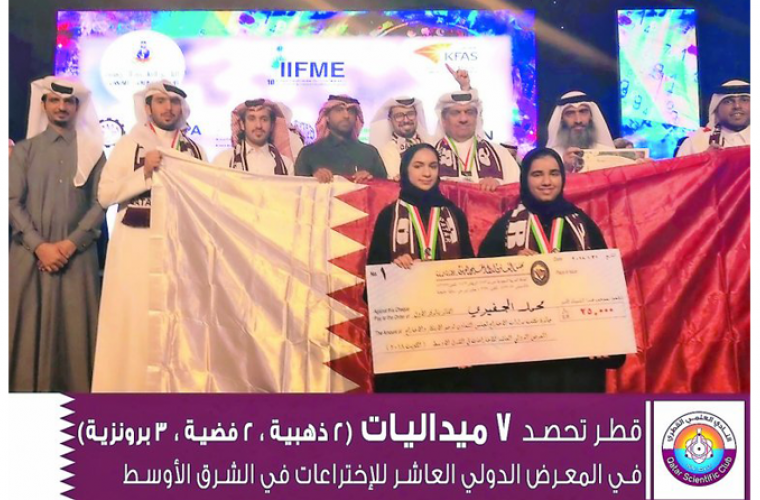 Seven Qatari youth from the Qatar Science Club have won 7 medals (2 gold, 2 silver and 3 bronze) at the 10th International Invention Exhibition in the Middle East, which was held in Kuwait.

A total of 130 inventors participated in the competition representing 39 Arab and foreign countries. Inventors from the Gulf countries represented 30 percent of the competitors coming from different countries.

The robot provides innovative instructions for learning sign language at an important stage of their development.

The 10th International Exhibition was organised under the theme of “Meeting of inventors with investors” and inaugurated by HH Sheikh Mohammed Al Abdullah Al Sabah, representative of H H the Emir of Kuwait Sheikh Sabah Al-Ahmad Al-Sabah and H E Talal Jassim Al-Kharafi, Chairman of the Kuwaiti Scientific Club.

The three day exhibition and opened its doors to the public on January 28, 2018 at 7:00 pm at the Courtyard Marriott Hotel, whereas the closing ceremony and announcement of results took place on Wednesday. Chairman of the Jury of the exhibition, David Farouqi, pointed out that the selection of the inventions and their nomination for the awards were carried out in accordance to the international standards of evaluation and specifications. The inventors’ works were classified into 22 categories or fields of inventions and each of the inventions was evaluated by at least three arbitrators.

Regarding the criteria of arbitration, David said that several criteria were taken into account, including the modernity of the invention, which must be new, shows creativity and has a positive impact on society, solves a certain problem, and can be remanufactured and marketed. Another gold medal was also won by the innovator Rashed Al-Muhannadi with the Al-Seeb Project, a project designed to monitor the health status of the workers in work sites, where the device was connected to give a signal to the main device in case of any problem. Silver medal won by the innovator Khalid Ali Al Ansari for inventing a base fixed on the back side of a car to carry the objects and equipment. Another silver medal won by Jassim Abdullah Al-Khunji, inventing a multi-purpose chair to help worshiper in the mosque. Bronze medals were won Sarah Amir Al Baker, Youssef Mansoor Al-Kahoumi, Mariam Al-Shafi. The inventor Jassim Al-Khunji said that he was happy to raise the Qatari flag in such international forums, which makes him proud among 38 countries. (Source)