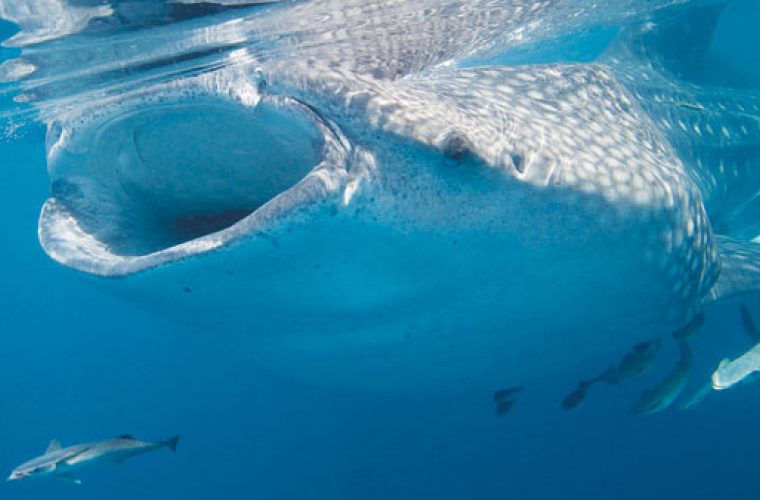 The Al-Shaheen oilfield area off the north eastern coast of Qatar has been identified as a favourite feeding ground for whale sharks in the Arabian Gulf. The sharks visit the place in hundreds every year and last year it was found that they stayed at the area for about six months. At its third year, the Qatar Whale Shark Research Project has been able to build a good picture of when, why and how many whale sharks visit the Al-Shaheen oilfield area . During the many expeditions this season the team managed to deploy satellite tags, acoustic receivers, acoustic tags, collect tissue samples and record identification photos of the sharks encountered. The project has identified close to 400 individual sharks since 2011 and many of the sharks return to the Al-Shaheen area, situated more than 80km from the nearest coast, every year. The Ministry of Environment (MoE) has joined with Maersk Oil Qatar, the Emiri Air Force and the Qatari Coast Guards to celebrate and recognise the collaborative efforts made by all parties during the 2013 Qatar Whale Shark Research Project season. HE the Minister of Environment, Ahmed bin Amer al-Humaidi, Brigadier Mashoot Faisal al-Hajri, Head of Helicopter Wing at the Emiri Air Force and Brigadier Ali Ahmed al-Mannai, Head of Qatari Coast Guard, together with Lewis Affleck, Managing Director of Maersk Oil, Sheikh Faisal bin Fahad al-Thani, Deputy Managing Director of Maersk Oil and members of the research teams were all in attendance. HE al-Humaidi said: “Today we recognise the impressive collaboration that has taken place between the Ministry of Environment, the Emiri Air Force, the Coast Guard, Maersk Oil and the various researchers from the Qatar Whale Shark Research Project. This is an important project for Qatar and is a great example of how industry, academia and the state authorities can effectively work together and achieve internationally recognised results. ” Sheikh Faisal said: “The Qatar Whale Shark Research Project is the first joint initiative that Qatar’s Ministry of the Environment and Maersk Oil have embarked on as part of our collaboration agreement to research Qatar’s marine biodiversity. At Maersk Oil, our strategy has always been to ensure that Qatar gains the maximum possible benefit from the hydrocarbon resources it possesses and to operate in an environmentally responsible manner.” While whale sharks have been studied for decades in other regions of the world, the recently documented aggregation offshore Qatar has only been studied for two years. Last year, the sharks appeared in late April and disappeared in early October. The massive amount of fish eggs produced in this period, primarily by mackerel tuna, is thought to be the primary reason for the sharks aggregating in such large numbers. On one particular day in May more than 150 sharks were seen at the same time in one location. The consistent reporting of whale shark sightings by the Maersk Oil offshore workers has proven extremely valuable for validating data and guiding the team to locate the sharks in the field. All observations indicate that the sharks spent several months in the Al-Shaheen area making it one of the most important feeding grounds in the Arabian Gulf. The discovery of this large aggregation has received a lot of attention from the global whale shark research community. In 2013 the BBC broadcasted their Wild Arabia TV-series containing a ten minute sequence of an offshore expedition that was conducted by the Qatar Whale Shark Project in 2012. The Qatar whale shark research team is already preparing for its 2014 research programme, and eagerly awaits the return of whale sharks to the Al-Shaheen area. http://www.gulf-times.com/qatar/178/details/377861/qatar-whale-shark-research%E2%80%99s-successful-season-celebrated