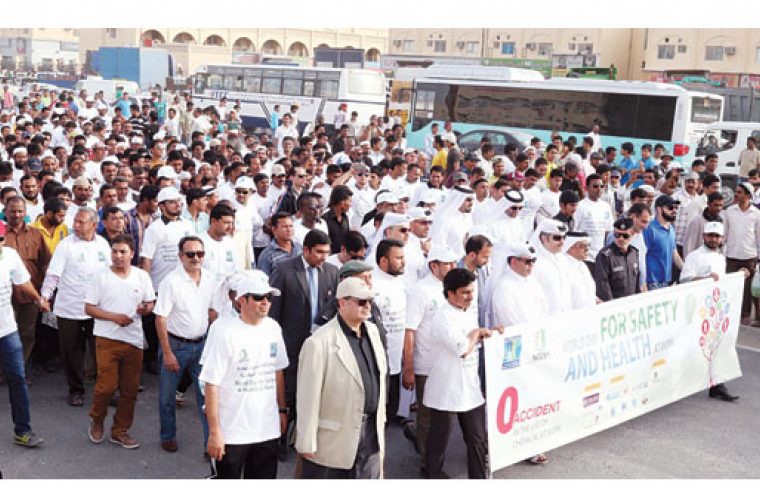 In a remarkable show of solidarity with the country’s expatriate labour force, senior Qatari officials from various departments joined several hundreds of workers in a walk for more than a kilometre along the busy Al-Attiya market neighbourhood in Doha’s Industrial Area yesterday afternoon.

The march was organised by the Supreme Council of Health (SCH) as part of its countrywide celebrations to commemorate the World Day for Safety and Health.

At the start of the march near the roundabout on Street 23 of the Industrial Area, SCH’s Public Health Department director Dr Sheikh Mohamed al-Thani reiterated Qatar’s commitment to protect the expatriate workers who “have all along been contributing considerably to the nation-building”.

Sheikh Mohamed explained some of the initiatives that Qatar had launched in recent weeks to protect the workers’ interests.

“Qatar will not spare any efforts to provide safety, health and good living conditions to the people who have all along involved in fulfilling numerous projects in the country. The contributions of the expatriate workers are vital for the country’s development,” he declared.

Before the march began, scores of workers, mainly residents of a number of accommodations in the Industrial Area gathered near the busy intersection where the sponsors distributed food packets, soft drinks, T-shirts and caps to them. There was a heavy rush to collect the kits at some of the distribution points.

All along the route of the march, which culminated at the intersection near Street 15, many onlookers lined the route to cheer the participants. Some of them joined the march while it was on its way towards the final destination.

Representatives of different expatriate communities marched along with the Qatari officials.

Qatar had announced on Thursday, on the occasion of the International Labour Day, that the government was reviewing the report of international law firm DLA Piper, assigned to review and make recommendations for the improvement of existing labour practices in the country.

Addressing a conference on “Qatar Labourers’ Rights Protection”, on behalf of HE the Prime Minister Sheikh Abdullah bin Nasser bin Khalifa al-Thani, HE the Minister of Labour and Social Affairs Abdullah Saleh Mubarak al-Khulaifi said the report would be studied in detail and necessary action taken in due course.

“Qatar was taking a number of steps for the welfare of workers in the country. These included prompt payment of salaries to all workers, constructing better accommodation for them as well as enforcing more measures for safety of the workers at the construction sites,” he explained.

“The welfare of workers in the State of Qatar is a matter of utmost importance. We will respond to the recommendations and release the report to the public after our review in alignment with the ongoing steps being taken by the state to improve the labour legislation and conditions of workers,” he added.