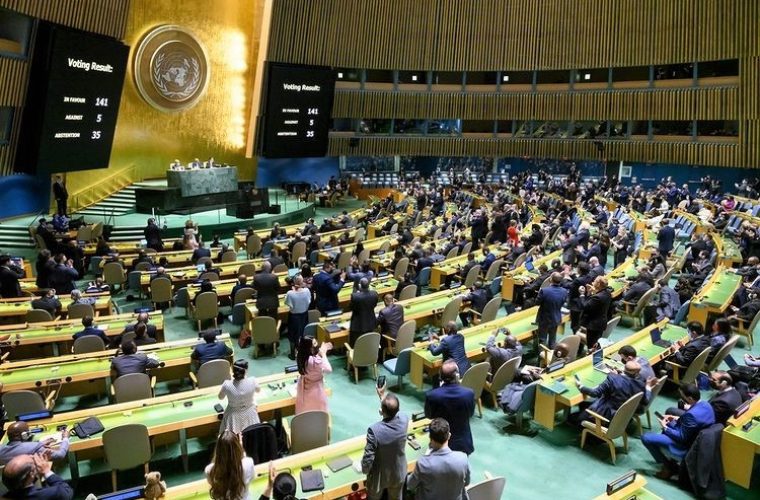 Qatar has voted in support of a United Nations (UN) resolution demanding that Russia immediately end its military operations in Ukraine.

A total of 141 out of the 193 member states voted for the resolution during an “emergency special session” of the UN General Assembly on Wednesday, 2 March 2022 at its headquarters in New York.

The overwhelming vote denouncing Russia’s attacks on Ukraine prompted a standing ovation and long, loud applause among delegates who supported the resolution. Five countries voted against it and 35 abstained from voting.

On Wednesday, 141 voted in favour of a General Assembly resolution that demands an end to the Russian offensive in Ukraine.https://t.co/Fcn5OxkS1V pic.twitter.com/R4GUO8DM6f

The US State Department commended Qatar and all the nations that supported the resolution, saying "the 141-5 vote margin demonstrates the overwhelming international consensus condemning Russia’s actions. This is not just about security in Europe. All countries have a vital interest in defending the principles and values that keep us all safe."

On Wednesday, H.H. the Amir received a phone call from Ukrainian President Volodymyr Zelenskyy. During the phone call, they discussed the latest developments in Ukraine, especially with regard to the ongoing military escalation, and the need to end the crisis through dialogue and diplomatic methods.

The countries that voted against the resolution include Belarus, Eritrea, North Korea, Russia, and Syria.

“End hostilities in Ukraine – now. Silence the guns – now. Open the door to dialogue and diplomacy – now. We don't have a moment to lose. The brutal effects of the conflict are plain to see. But as bad as the situation is for the people in Ukraine right now, it threatens to get much, much worse."

Russia's war on Ukraine, which began on 24 February 2022 has been met with international outrage, with the European Union, US, Canada, and the UK, among others, implementing tough sanctions on Russia. The UN said on Wednesday that it had recorded nearly 230 civilian deaths in Ukraine, including 15 children since Russia's invasion began.