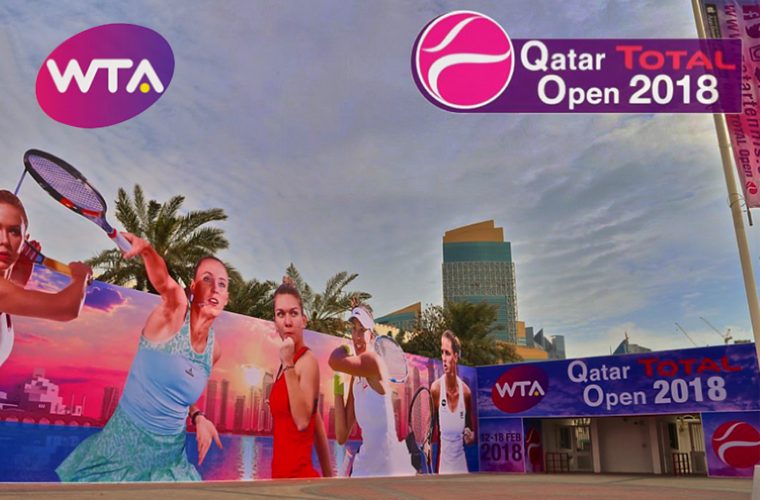 The Qatar Total Open (QTO) -- one of the most prestigious tennis events in the world -- officially welcomes fans across the country starting today until February 18, 2018 at the Khalifa International Tennis & Squash Complex. The 2018 QTO will be a professional women's tennis tournament played on hard courts where nine out of the world’s top 10 female tennis players are taking part. It will be the 16th edition of the event and a Women's Tennis Association (WTA) Premier 5 tournament on the 2018 WTA Tour.

After several days of anticipation, the state-of-the-art Khalifa International Tennis & Squash Complex is wearing a new look with attractive branding reflecting the mood of the seven-day sport event hosted by the Qatar Tennis, Squash and Badminton Federation (QTSBF). This year’s tournament carries a total cash prize of $2,666,000 USD with a singles draw of 64 players and doubles of 32.

Tennis fans will have the opportunity of witnessing their favourite stars on parade with Australian Open champion, Caroline Wozniacki of Denmark (World No.1) who headlines the host of stars in action. Her finals opponent in Melbourne, Simona Halep, will also be competing, along with many other top players including Angelique Kerber and Maria Sharapova, who joins as a tournament wildcard. The line-up also includes Qatar's own promising player Mubarka Al-Nuaimi. Last year, Karolina Pliskova beat Caroline Wozniacki in the Qatar Total Open final to win her second title of 2017.

While talking to reporters ahead of the QTO opening day, World No. 1 Caroline Wozniacki said that after taking a shot at the New York Marathon, the next thing in her mind is a Triathlon. “I don’t know if I would be good at it, but I think I will try to do a triathlon eventually. After I’m done playing, mostly to keep in shape so I can still eat whatever I want. I think that’s the main motivation. I think after doing a marathon, I did a pretty decent time -- so I think a triathlon would be fun to do.” Wozniacki added that her life has not changed after last month's Australian Open win.

BeIN Sports will exclusively cover the QTO 2018. BeIN SPORTS HD12 will bring you all the action as it happens day-in and day-out. Presenters Andy Kerr, Nicky Crosby, and former tennis star Prakash Amritraj will keep you updated on the day’s main talking points in pre-match and post-match studios. The BeIN coverage gets underway half an hour before the first match begins every day, starting today.

“The expectations for this year’s tournament are quite high considering the caliber of players on parade," says Tournament Director Saad al Mohannadi. "We're delighted to play host to such a strong field. Tennis fans in the country are set for a week-long feast of great games, which is something we're happy about. Ticket sales have been quite encouraging and we believe the Qatar Total Open 2018 will be the best ever.”

Those wishing to attend are advised to book tickets early. Ticket prices range from QR 25 to QR 350, depending on the date and seating section.

Is the Qatar Total Open 2018 in your list of events to attend for the 7th annual Qatar National Sport Day? If so, which star player are you rooting for? Drop us a line in the comments below and don't forget to like and share this article!