Qatar to support Turkish economy with investments worth QR55bn 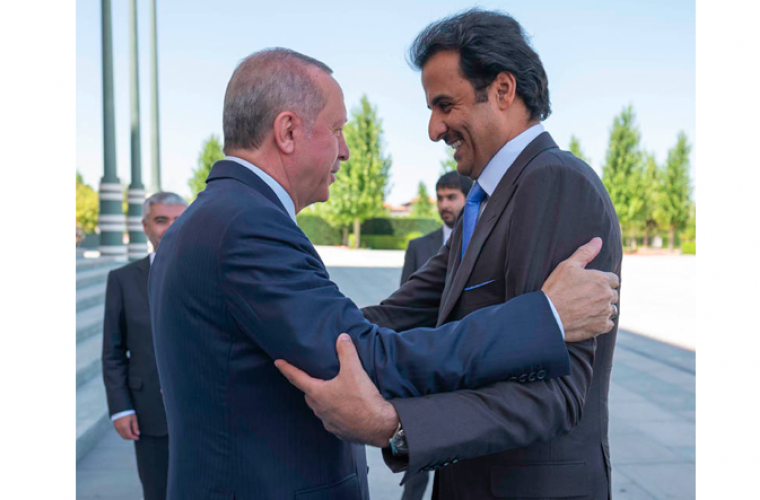 His Highness the Amir Sheikh Tamim bin Hamad al-Thani has issued directives to support the Turkish economy with a host of economic projects, investments and deposits worth a total of QR55bn ($15bn) .

This came in a meeting of His Highness the Amir with the President of Turkey Recep Tayyip Erdogan at the Presidential Complex in Ankara on Wednesday.

The Amir and the Turkish President discussed strategic bilateral relations. They also discussed ways to enhance bilateral cooperation in all fields, especially in economic and investment fields, the latest regional and international developments, and exchanged views regarding them. Both sides stressed on the importance of resolving differences through dialogue and through diplomatic channels, in order to maintain the region's peace and stability.

The meeting was attended by members of the official delegation accompanying the Amir. It was attended on the Turkish side by a number of cabinet members.

His Highness the Amir attended a luncheon banquet held in his honour by the Turkish President at the Presidential Complex.

Upon his arrival at the Esenboga International Airport in the Turkish capital Ankara on a work visit, the Amir was received by Turkey's Minister of Energy and Natural Resources Fatih Donmez, the Governor of Ankara Ercan Topaca, the commander of the garrison of Ankara Major-General Ahmet Abis, Turkey's Ambassador to Qatar Fikret Ozer, Qatar's Ambassador to Turkey Salem Mubarak Shafi al- Shafi, as well as members of the Qatari embassy in Turkey.

His Highness the Amir Sheikh Tamim bin Hamad al-Thani later left Ankara. The Amir was seen off from Esenboga International Airport by Fatih Donmez and other dignitaries.

The Amir was accompanied by an official delegation.

His Highness the Amir returned to Doha yesterday evening from a work visit to the sisterly Republic of Turkey.

"Turkish-Qatari relations are based on solid foundations of true friendship and solidarity," he said.

Turkey and Qatar have become close economic and political partners in recent times.

A Guardian report said Turkey's beleaguered currency bounced back from record lows yesterday after Qatar pledged to shore up the banking sector.

The lira rallied by 6% after the Qatari pledge and a separate move by Turkey's central bank to boost the finances of the country's banks.