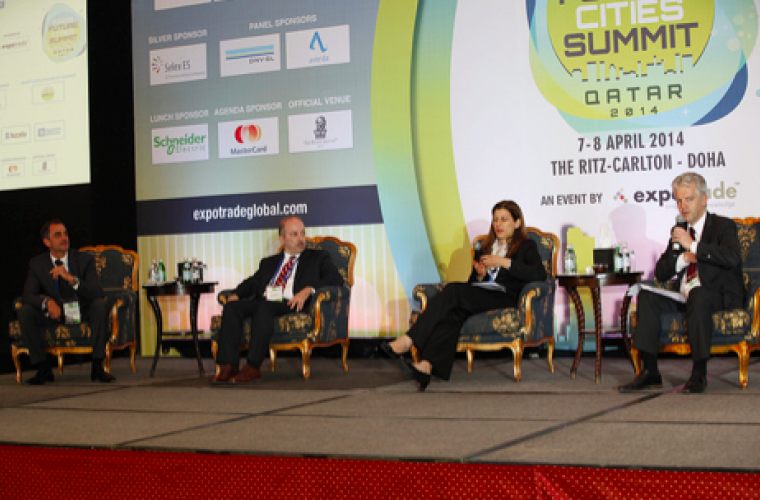 Arab Future Cities Summit Qatar 2015, the Middle East’s premier smart city event, is back with a bigger and better fourth edition, featuring an exciting array of local and international speakers with more thought-provoking presentations, roundtable sessions, case studies and panel discussions. The summit will be held at the Ritz-Carlton in Doha, Qatar during April 13 -14, 2015.

Held under the patronage of the Ministry of Municipality and Urban Planning of the State of Qatar, the summit will feature topics ranging from the need for smart cities, urban resilience strategies and government initiatives, to sustainable infrastructure, automation, resource management, energy, telecommunications and smart automation. The event will offer insights into the world of opportunities in the Middle East region with special focus on Qatar and its key initiatives such as Lusail City, projects taken up by Qatar Rail, ICT Qatar and ASHGAL. It will host over 350 senior level decision makers from across the GCC including government officials, architects, engineers, designers, urban planners, sustainability experts, technical experts and solution providers.

The World Economic Forum has ranked Qatar as the most competitive economy in the MENA region and it holds the 13th position globally based on a high-quality institutional framework, stable macroeconomic conditions, and an efficient goods market. Qatar has the highest per capita income in the world and is the country with the lowest unemployment.

The Qatar National Vision 2030 aims at transforming the small, gas-rich state of Qatar into an advanced country by 2030 through sustainable economic development, fuelled mainly through public and private sector initiatives.

An expected spend of $150 billion over the next decade as part of the country’s National Vision 2030 will underpin growth in the market including $40 billion on railways, a $15.5 billion airport, $20 billion investment into roads, the new $7.4 billion port and $4 billion on stadiums.

If the state-of-the-art stadiums and the impressive city of Lusail are anything to go by, Qatar’s plans of hosting a green World Cup in 2022, will be riding on the shoulders of the robust infrastructure it plans to develop. With the scale of development stretching across macro and micro initiatives, the region is poised to be a hub of social and economic development.

The importance of Qatar’s vision of sustainable economic development cannot be underlined enough. With building cities for the future being at the heart of the move towards global sustainability, there is growing focus on balancing the limited availability of natural resources and growing consumption with the overwhelmingly rapid urbanization making its presence felt across the world. Add the spirit of competition between cities and the need for harmonious urbanization and sustainable development becomes all the more acute. With everyone vying for the same resources, there is renewed focus on developing smart or technology-centric cities that are, at the same time, intelligent or people centric as well.

Any plans for the development of smart cities bring to the forefront the need for a comprehensive plan for the management of a gamut of resources, spanning the range from energy, water and waste to infrastructure, policy and administration. But what is of the essence is the fact that it is people who form the crux of any sustainable development. Rather than being mere participants, people need to be empowered in order to achieve goals such as group coordination and collective decision-making which are cornerstones of any great city of the future. In fact, participation and consultation within the scope of intellectual and social capital are increasingly becoming as important to the concept of a successful city as the more obvious environmental, technical and financial capital elements.

The last ingredient in the mix is cultural capital, the element of leisure and enjoyment that can be the differentiating factor in the race to be at the top of the smart cities list. Countries such as Qatar have already taken cognizance of the worth of these factors, and are, therefore, ideal hosts for a summit such as the Arab Future Cities Summit 2015.