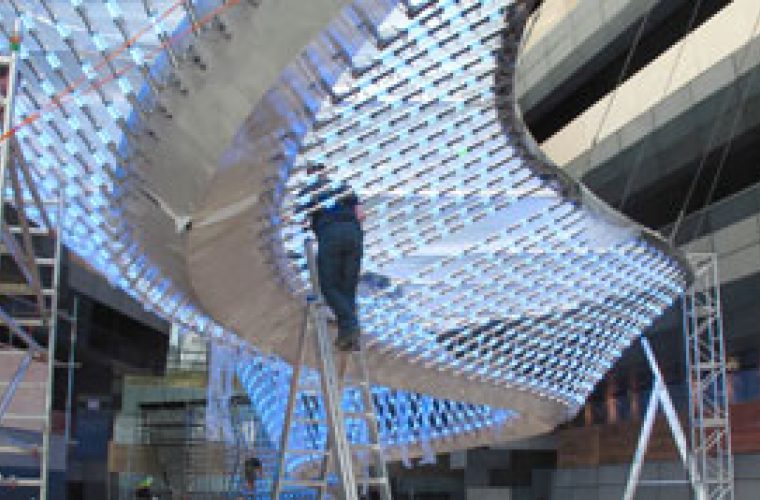 A computer-generated view of the world’s largest chandelier, now being installed in an iconic property scheduled to be opened on the Doha Corniche in April 2010. Designed by Beau McClellan, the 20,000kg chandelier, named Reflective Flow, will use about 55,000 light-emitting diodes (LEDs). The energy consumption and maintenance are expected to cost a fraction of what a normal chandelier of this size would entail, thanks to the efficient use of the LEDs. ------ An innovative office building on the Doha Corniche is set to blaze a trail by installing the world’s largest chandelier using about 55,000 LEDs. Designed by one of the world’s most respected lighting and product designers Beau McClellan, the “work of art and science” will adorn black and grey-stone building, which is expected to open in April 2010. Named by McClellan as ‘Reflective Flow’, the 20,000kg chandelier is in fact an interactive LED sculpture that will “talk to the people” the moment they walk in. “The chandelier will react to a person’s mood as they enter the building and display a subliminal moon effect … or lava, or a lightning bolt. If there are more people, there is more content,” the Portugal-based Scottish designer told Gulf Times.Content would also be generated by placing cameras at key locations around the building enabling the chandelier to interact with the passers-by, and, depending on their movement, trigger new content. The videos will be low-resolution since McClellan did not want the sculpture to be used as a media screen. The signature art-piece is made up of 2,300 individually hand-ground optical crystals – each shrouded on either side by pieces of concave glass, and covered with a unique reflective coating. “The glass coating on the sculpture has been in development for four years. It has all the qualities of a pure mirror, reflecting exactly all that surrounds it, including light, movement, shape and colour,” McClellan said. This means during the day, the Reflective Flow will be an organic art sculpture, constantly changing with its surroundings. How it reacts during the night is a different wonder. “When light is introduced behind the glass frames, the unique coating becomes either fully- or semi-transparent, allowing the sculpture to transform into an incredible ever-changing light piece,” explained McClellan. The anti-static coating will also help repel dust, thus reducing the problem of cleaning a light installation of this size. Also, the energy consumption and maintenance are expected to cost a fraction of what a normal chandelier of this size would entail, thanks to the efficient use of about 55,000 LEDs. “Even when fully fired up, the chandelier will use the power equivalent to that of 70 lightbulbs,” the designer said. Glowing giant Some facts about the Reflective Flow (all figures in approximation): * Linear length – 38.5m * Linear width – 12.5m * Top frame (length if stretched) – 93m * Bottom frame (length if stretched) – 46m * Hand-ground optical crystals – 2,300 units * Individual glass – 4,600 units * LED – 55,000 units * Weight – 20,000kg * Height of RF (at tallest point of chandelier body) – 5.8m * Height when suspended (at top frame height) – 16m GT