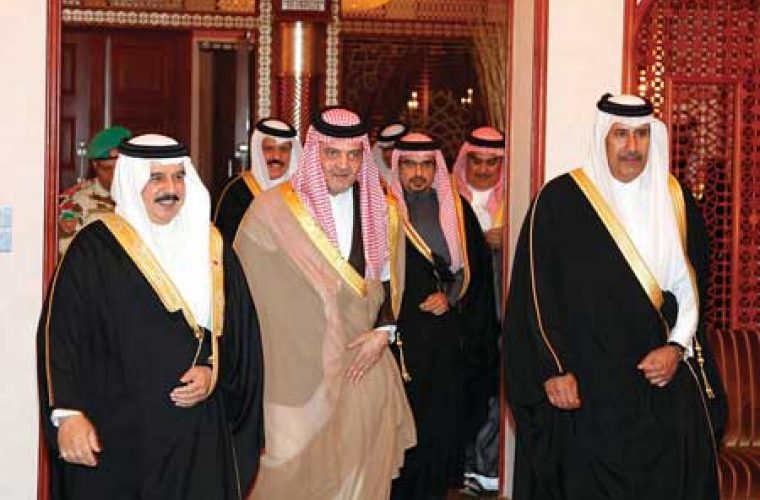 Manama: Qatar’s Prime Minister and Foreign Minister H E Sheikh Hamad bin Jassem bin Jabor Al Thani yesterday called on the Bahraini opposition to heed their government’s call for dialogue while expressing the hope that Bahrain would continue to be an oasis of security and stability. Sheikh Hamad bin Jassem was in Manama after armed forces rolled into Bahrain from Saudi Arabia and the UAE as part of the the Gulf countries’ joint Peninsula Shield Force to help restore order in the kingdom. The Prime Minister met H M King Hamad bin Isa Al Khalifa along with Saudi Foreign Minister Prince Saud Al Faisal and GCC Secretary-General H E Abdulrahman bin Hamad Al Attiyah. Speaking to Al Jazeera after the talks, the Prime Minister said that the Bahrain opposition is part of the nation and their government’s offer of talks is sincere. They should leave the streets and come to the table to resolve their problems and initiate meaningful reforms. Earlier, thousands of mostly Shia protesters occupied Manama’s business district, turning the regional banking hub into a ghost town as they pressed their calls for democratic change. The Saudi government said it had responded to a call for help from its neighbour as Saudi-led forces crossed the causeway. “The council of ministers has confirmed that it has answered a request by Bahrain for support,” the Saudi government said in a statement carried by the SPA. It said that under an agreement of the Gulf Cooperation Council, “any harm done to the security of a member state is considered a harm done to the security of all members”. About 1,000 Saudi soldiers entered Bahrain to protect government facilities, a Saudi official source said. Witnesses saw some 150 armoured troop carriers, ambulances, water tankers and jeeps cross into Bahrain and head towards Riffa. The UAE also said it sent some 500 police to help “defuse tension”, according to Foreign Minister Sheikh Abdullah bin Zayed Al Nahyan. The Shia-led opposition alliance said any foreign force would be treated as an invading army. “We consider the arrival of any soldier, or military vehicle, into Bahraini territory... an overt occupation of the kingdom of Bahrain and a conspiracy against the unarmed people of Bahrain,” said an opposition statement. Protesters blocked access roads to the Financial Harbour business complex, a day after more than 200 people were injured in clashes. Agencies

Want to send a tip? Drop us an e-mail at contac[email protected], anonymity is guaranteed!