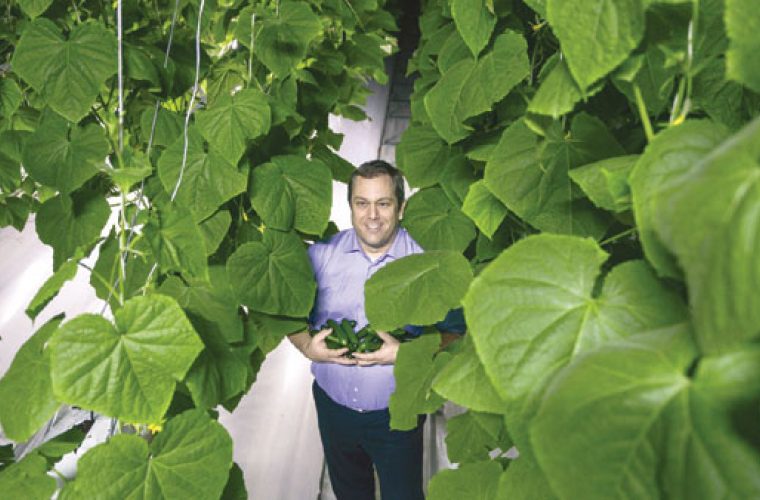 The mission to achieve food security for Qatar is all set to get a fillip from the Sahara Forest Project (SFP) pilot facility which has demonstrated that there are significant comparative advantages using saltwater for the integration of food production, revegetation and renewable processes. “The pilot facility, a partnership between Yara International ASA, Qatar Fertiliser Company (Qafco) and the Sahara Forest Project, has proven the suitability and robustness of the concept for large-scale commercial operation in desert environments,” Joakim Hauge, CEO, SFP, said yesterday. The pilot operations have verified the viability of profitable, large-scale, seawater-cooled greenhouse production round-the-year in Qatar, with a high quality and efficient process realised with half the fresh water usage than in comparable greenhouses. The yields indicate that SFP will match the yearly import of cucumbers and tomatoes to Qatar with eight and 40 hectares, respectively, of greenhouse production. With 60 hectares of greenhouse production, SFP will match the yearly import of cucumbers, tomatoes, peppers and aubergines to Qatar. “The remarkable results demonstrated on the ground reveal the potential for enabling restorative growth and value creation in arid land,” Hauge explained while announcing key findings from the pilot facility. The seawater-cooled greenhouse of the SFP pilot facility has proven to be highly productive. The yields are competitive with those in commercial operations in Europe. Current yields indicate three crops a year will produce at least 75kg/sqm and significantly higher yields can be achieved in a commercial set-up. The first fully operational Concentrated Solar Power unit in Qatar, set up in the SFP pilot facility, is used to drive a thermal desalination unit for production of freshwater for plants in the greenhouse and outside. Heat from the desalination system is used to warm the greenhouse in the winter. Excess waste heat is removed through innovative links with the greenhouse and evaporative hedges which provide wet-cooling efficiencies without cooling towers. The external evaporative hedges provided cooling up to 10 degrees for agricultural crops and desert revegetation. Vegetable and grain crops grow outdoors throughout the year. Useful desert plants grow rapidly when cultivated with small quantities of water and nutrients. The saltwater infrastructure makes possible many concept extensions. Salt was produced in large evaporative ponds as the end product of the saltwater value chain. Algae strains with potential commercial value displayed good tolerance to high salinities and temperatures of the Qatari summer. The state-of-the-art 50 cu m algae test facility, a first in Qatar and the larger region, enables commercial-scale research on the cultivation of marine algae species for use in nutrition, pharmaceuticals, biofuels and as animal and fish fodder. Halophytes (salt tolerant plant species) useful as fodder or bioenergy grew successfully on pure seawater through the summer, and innovative saltwater irrigation systems operated without clogging or corrosion. “The success of the SFP pilot facility creates commercial opportunities for the near-term production of competitive products and enhanced profitability with future economies of scale,” Hauge observed. It was in 2011 that SFP entered into a co-operation with Qafco and Yara International. Based on the positive findings of a comprehensive feasibility study, involving more than 60 scientists and experts from 12 countries, the partners signed an agreement in February 2012 to realise the SFP pilot facility in Qatar. The first harvest of cucumbers came in November 2012. The pilot facility was officially opened in December 2012 by the then Heir Apparent HH Sheikh Tamim bin Hamad al-Thani. Scientific researchers from Qatar, the Mena region, Europe and the US have participated in the scientific platform provided by the pilot facility, in addition to the three partners. http://www.gulf-times.com/qatar/178/details/370593/qatar%E2%80%99s-food-security-plans-get-a-boost-