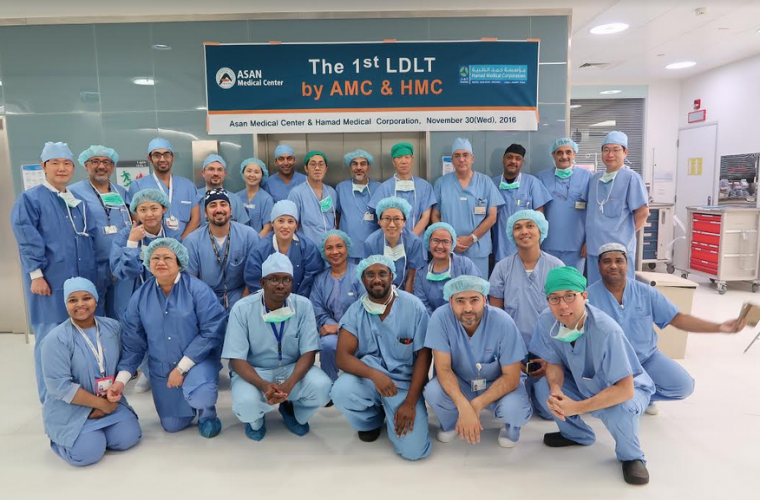 Two months after undergoing lifesaving liver transplant surgery, 58-year-old Mr. Zaid is comfortably recovering at his home in Doha. He says he owes his life to a combined team of surgeons, anesthetists, and nurses; a team who seamlessly orchestrated two complex surgeries in perfect step, despite living thousands of miles apart and not having worked together before.

Late last year a team of ten leading doctors and nurses from South Korea joined surgeons, anesthetists, nurses and technicians from Hamad Medical Corporation (HMC) and spent 20 hours in the operating theater at Hamad General Hospital. First completing the partial resection of the donor’s liver, which took some eight hours, the team then removed Mr. Zaid’s damaged liver and implanted the donated portion of the liver into his body, which took nearly 12 hours. Suffering from liver cirrhosis, Mr. Zaid’s donor was his 26-year-old nephew.

“I’m so grateful to all the surgeons, physicians and nurses who participated in my transplant procedure and cared for me. The care I received was excellent,” Mr. Zaid said, adding that he is looking forward to returning to his normal life in the near future.

“In a living donor transplant, both the donor and the recipient undergo surgery simultaneously, with the donor’s surgery beginning a few hours in advance of the recipient’s surgery. The surgeries demand perfect teamwork. Both teams must work together in perfect step, functioning as a cohesive unit,” said Professor Hatem Khalaf, Clinical Lead and Senior Consultant, HPB Liver Transplant Services with HMC, who led the local transplant team.

“In Korea, we perform a high volume of living donor liver transplants – amongst the highest in the world. Living liver donation involves two complex surgeries and our skilled surgical team has extensive training and experience in this area. We were pleased to share this expertise with our colleagues in Qatar,” said Dr. Sung-Gyu Lee, President and CEO of the Asan Healthcare System, who led the South Korean team.

The November surgery was the culmination of many weeks of planning and dedication, which included a small team from Qatar spending a week in Korea receiving training in living donor liver transplantation and members of the Korean team extending their time in Qatar to assist with monitoring the status of the patients after the transplantation.

The living donor liver transplant surgery was conducted in conjunction with the first Qatar-Korea Medical Forum. Nineteen leading doctors and nurses from South Korea, along withsurgeons, anesthetists, nurses and technicians from HMC, participated in the Forum. During the visit, five more surgeries (orthopedics and cardiology) were completed as part of a collaborative relationship between HMC and the two South Korean hospitals, Asan Medical Center (AMC) and Seoul St. Mary’s Hospital (SSMH). The three organizations are exploring potential areas of collaboration in healthcare, research, and training as part of HMC’s commitment to providing patients with access to the best possible care.

“We are very grateful for the opportunity to collaborate with the Koreans. Such collaboration can provide access to specialist training and breakthrough scientific knowledge generated by joint research with other countries. The future of our health system depends on supplementing our existing expertise and as a result, HMC works in close partnership with a wide array of leading international agencies and institutions,” said HMC's Deputy Chief Medical Officer Dr. Abdullatif Al Khal.