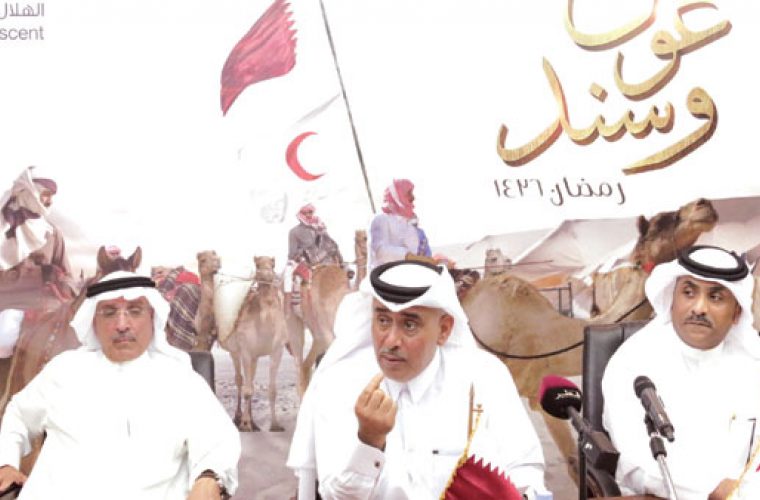 Qatar Red Crescent (QRC) has announced the launch of its Ramadan campaign for the year 1436 AH.
The campaign includes targeted projects worth QR100mn both within and outside Qatar.
Announcing the launch at a press conference, QRC secretary-general Saleh bin Ali al-Mohannadi said: “First, I would like to send the warmest wishes to HH the Emir Sheikh Tamim bin Hamad al-Thani, the Qatari nation and all Muslims around the world for the coming holy month of Ramadan.
“Our Ramadan campaign involves Ramadan-specific and year-round projects in different areas of humanitarian action, including shelter, health, food and non-food assistance, water and sanitation, education, family development and social/health awareness, with a total budget of nearly QR100mn.”
Saad bin Shaheen al-Kaabi, one of the officials present, introduced the marketing channels and methods of donation under the campaign, including online, cash and bank transfer.
Ahmed al-Khulaifi, the campaign’s manager, elaborated on the targeted projects.
Locally, QRC will conduct a Ramadan Iftar tent, medical examinations and awareness at mosques, Iftar meal distribution on roads and hospital visits to support patients. There will also be social events such as “Recite and Ascend”, “This is My Wish” and “Outstanding Students”.
Throughout the year, QRC will provide assistance to 300 poor students and 600 poor families, buy three new ambulances and more hospital beds and manage the Patient Support Fund for 300 patients.
At the international level, food packages will be distributed to the poorest in 18 countries and 35 relief and development projects will be undertaken in nine countries - Palestine, Lebanon, Yemen, Sudan, Somalia, Nepal, India, Sri Lanka and Mauritania. These projects are expected to serve up to 900,000 people.