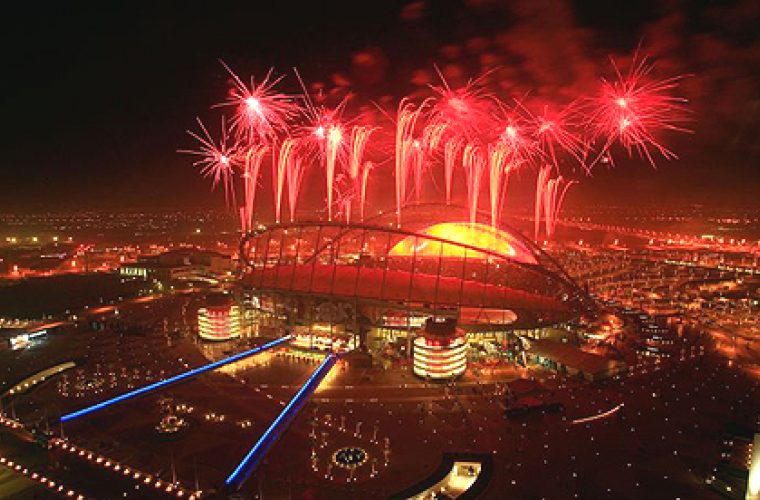 Doha's controversial failure to make the short list for the 2016 Olympics has brought a bid from Qatar for the 2018 football World Cup much closer, Observer Sport can reveal. The gas- and oil-rich state is keen to bring one of the world's major events to its walls which juts out into the Arabian Gulf, and after a snub by the International Olympic Committee (IOC) at its meeting in Athens last week, it will concentrate instead on challenging England, among others, for the right to host football's flagship tournament. Qatar had been waiting to see the outcome of its Olympic bid before deciding to formally state an intention to bid for the World Cup, but it is now expected to announce its candidature within weeks. 'They are deadly serious about bringing a major event to Qatar and after the Olympics, the World Cup was always next on their list,' said an insider who is close to the Emir. However the Emir would want assurances that Qatar would not be 'humiliated' in the way he believes it was by the IOC, which refused to include Doha on the short-list despite its own evaluation commission ranking the bid equal third on technical merit with Chicago - the favourites to host the 2016 Olympics - and ahead of Rio de Janeiro, which was put through to the next stage. The IOC president Jacques Rogge claimed it was because the October dates chosen by Doha to stage the Games were outside its recommendations, but many insiders believe it was because he feared the financial muscle that Qatar could bring to the race. It may seem inconceivable that a country of only 4,416 square miles could stage a World Cup, but Qatar is already making big plans to develop the infrastructure necessary by building stadiums and hotels in Ras Laffan, Al-Khor, Mesaieed and Dukhan, as well as Doha. An earlier plan of co-hosting the event with the United Arab Emirates and Bahrain has been shelved. Qatar has already staged the 2006 Asian Games (which an amazing success) and is due to host the 2011 Asian Cup. The UAE last month submitted a bid to Fifa to host the Club World Cup in 2009 or 2010 and has talked openly of trying for the 2018 World Cup. 'There is a lot of competition between Qatar and the UAE to stage a major event first, and the Emir is determined that Qatar should win,' said the insider. 'They will not give up until they get something.' Qatar beat China 1-0 in a qualifying match for the 2010 World Cup yesterday courtesy of a first-half penalty in Tianjin, leaving the Chinese hosts with a tall order if they are to make it to South Africa for the finals. China now trail the Qataris by four points with two matches of first-qualifying remaining as the pair effectively battle it out for the second position in Asian Group One, behind Australia. The match was decided by a 14th-minute penalty awarded after Gao Lin was adjudged to have impeded a Qatari defender in the area after a free kick, their Uruguayan-born striker Sebastián Quintana sending the goalkeeper the wrong way from the spot. China face Iraq in Tianjin on Saturday before their last fixture, against Australia in Sydney on 22 June. Qatar host the Socceroos on Saturday and face Iraq in the final match. A goal from Choe Kum Chol after 71 minutes gave North Korea a 1-0 win over bottom-placed Turkmenistan in Pyongyang, putting them top of Group Three with eight points from four games, and still to concede a goal. South Korea, three points adrift in second place, were due to face Jordan later yesterday. North Korea will host Jordan on Saturday while Turkmenistan will be at home to South Korea before the final round of matches takes place on 22 June, when South and North Korea meet in Seoul while Jordan host Turkmenistan. In African qualifying South Africa beat Equatorial Guinea 4-1 in Pretoria for their first win in Group Four (which also serves qualifying the next African Nations Cup),, while Portsmouth's Sulley Muntari has been ruled out of today's Group Five qualifier between Ghana and Lesotho in Bloemfontein because of a toe injury. He is also expected to miss Ghana's qualifier against Gabon next Sunday. Lesotho are playing in South Africa as their own stadium, in Maseru, is being renovated The Guardian