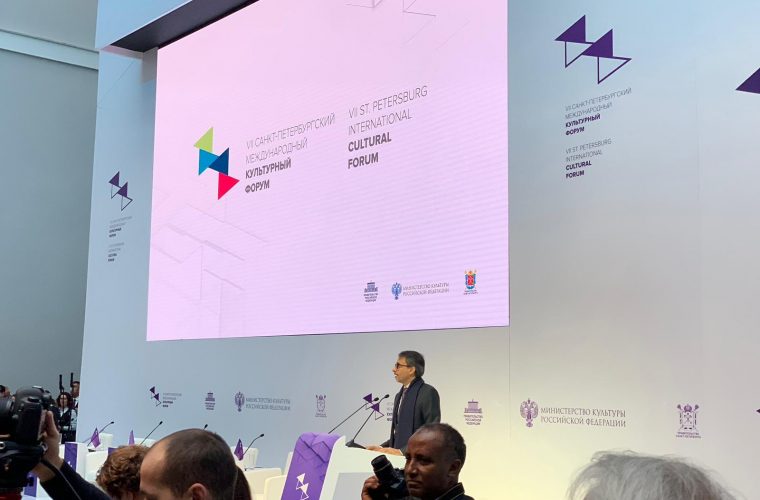 The 7th St. Petersburg International Cultural Forum concluded successfully in Russia on 18 November. 35 foreign delegations were part of this prestigious Forum where Qatar was the guest of honour for the very first time. This honour was given to Qatar because both countries are celebrating the Qatar Russia 2018 Year of Culture which aims to deepen relations and promote future collaboration between the two countries through a mutual exchange of culture, heritage and the arts.

The Forum was inaugurated on 15 November by His Excellency (H.E.) Russia's Deputy Prime Minister for Sport, Tourism, and Cultural Development Olga Golodets and H.E. Minister of Culture and Sports Salah bin Ghanem Al Ali, who chaired Qatar's delegation to the forum.

The St. Petersburg International Cultural Forum aims to discuss ways to support cultural cooperation between countries and their peoples around the world as well as to promote knowledge exchange on cultural and artistic issues through holding seminars, lectures, roundtables, and theater, film and musical shows in addition to supporting and developing youth initiatives.

In 2018, Qatar was awarded with the honorary status of the ‘Guest Country of the 7th St. Petersburg International Cultural Forum’. Qatar especially prepared special programmes for the Forum. These comprised of discussion sessions and different cultural events, along with a number of tours of creative groups and performers like Dana Al Fardan and the Qatar Philharmonic Orchestra.

The forum will also feature a variety of Qatar Museums Department presentations, as well as recent presentations on cinema in Qatar, Qatari artists and photographers works, and a concert of Qatar Philharmonic Orchestra.

Passengers on board this flight were treated to an exclusive surprise live performance of Qatar Airways’ original boarding music composed by local Qatari musician and songwriter, Dana Al Fardan.

The Qatar Philharmonic Orchestra were travelling to Russia for a unique concert in St. Petersburg, in celebration of the Qatar Russia 2018 Year of Culture. Famous musician and singer, Dana Al Fardan were also on the plane along with I Love Qatar’s CEO Khalifa Saleh Al Haroon, who were all travelling to St. Petersburg to be part of the Forum.

Qatar Philharmonic Orchestra performs in Russia for the first time

The Qatar Philharmonic Orchestra performed for the very first time in Russia in context with the Forum under the theme ‘28 different cultures, one tune’ which signifies the 28 nationalities that make up the one unique and unified sound that was experienced at this concert.

The Qatar Philharmonic Orchestra is a member of Qatar Foundation for Education, Science and Community Development, and performs and promotes western and Arabic music in order to inspire the people of Qatar and the Arab world to create and enjoy music.

The concert embodied, through Qatar’s national anthem, the highest meaning of common cultures when Fahd Al Kubaisi combined the Arabic and Russian languages. He also combined both Arabic and Russian alphabets in one of the Qatari national songs that he performed to show an example of understanding and friendly relations among different cultures.

This exhibition which is the biggest art and photography exhibition from Qatar to be showcased in Russia, was inaugurated in St. Petersburg on 14 November and visualises the past, present and future of Qatar. It also expresses the changes that occur in Qatar and the prospects that are opening up before it and has been organised with the support of Doha Film Institute, Qatar Museums and Virginia Commonwealth University in Qatar.

The exhibition has two parts: 1. ‘Building a Vision: Photography from Qatar’, curated by Dr. Giles Hudson and Sheikha Maryam Al-Thani, includes more than 250 photographs by 60 different photographers from 28 diverse nationalities living in Qatar. Highlights of this part include 200 photographs from the historical collections of Qatar Museums and have been showcased for the very first time; 2.’ States of Transformation’ has been curated by Bahaa Abudaya and highlights 100 contemporary works from 46 artists of diverse nationalities.

The exhibition will run on in St. Petersburg till 10 December and has already seen a huge influx of visitors who have come to the exhibition to marvel at the art displays on offer.

Two Qatari movies were screened at the Forum at the Manege Central Exhibition Hall. Details of these movies are given below:

Young Sons of the Desert (15 November)

In times past, when the people of Qatar relied on the strength of their traditions and skills to survive the extreme environment of their desert home, children learned life’s essential lessons by following examples set by their elders. Young Sons of the Desert tells the heartfelt story of a desert sheik passing down the hard-won wisdom of Qatar’s forefathers to five young boys from the city. Together they embark on a journey across some of the world’s toughest desert terrain that binds Qatar’s old generation to its young and ensures that the nation's proud traditions are delivered to the guardians of the nation’s future.

The Love of Books (17 November)

War-torn Bosnia in 1992. The city of Sarajevo is besieged and burning. Great art treasures are lost in the flames and only one library remains. Amid bullets and bombs, a group of book-lovers risk their lives to rescue 10,067 irreplaceable Islamic manuscripts. At stake is a nation’s history. Using first hand testimony and dramatisation, this film is a gripping tale of wartime Sarajevo, and also of the importance of books to the identity of a people.

1. H.E. Ambassador of the State of Qatar to the Russian Federation Fahd bin Mohammed Al Attiyah

H.E. Ambassador of the State of Qatar to the Russian Federation Fahd bin Mohammed Al Attiyah was one of the speakers at the Plenary Session ‘Culture as the Country’s Strategic Potential’ that took place at the Hermitage General Staff Building. At the session, he talked about how culture was a universal language that everyone understood and that allowed him as the ambassador to overcome all cultural differences between Qatar and Russia, although these differences do exist. He told those present that he direct communication between patrons or arts and workers from various spheres of culture was very important as there was no substitution for culture; communication must be direct, so Qatari culture should not be distorted.

Executive Director of the Arab Engineering Bureau Group of Companies Ibrahim Al Jaidah was one of the experts at the World Experts View on ‘Architecture as a face of nation’ at the Hermitage General Staff headquarters and told the audience that though he represented a relatively small nation, Qatar has maintained its identity and not become just large megalopolis, but has, in fact, studied modern architectural technologies and continued to demonstrate the country’s national identity through these tools.

H.E. Minister of Culture and Sports Salah bin Ghanem Al Ali told the audience and his fellow Ministers of Culture from Russia and Italy at the Podium Discussion of Ministers of Culture of Russia, Italy and Qatar: ‘Unified Cultural Space: Myth or Reality?’ at the Hermitage General Staff Building, that Qatar had a unique culture and that all its individuals believe in the value of diversity and multiculturalism, pointing out that, today, there are more than 150 nationalities in Qatar, which reflects the culture of coexistence among nations.

He pointed out that the issue of cultural diversity in Qatar was not a slogan but a reality that was being promoted through different institutions like, the

Doha International Center for Interfaith Dialogue, which contributes to building dialogue among different civilizations and cultures.

Qatar Foundation for Education and Science and Community Development, which is an example of promoting knowledge and cultures through its global universities and colleges, where more than 3,000 students from different cultures are working to deepen mutual understanding of cultures.

Doha Film Institute, which provides an opportunity to exchange cultures with film professionals from around the world to produce and showcase their films at the Ajyal Film Festival.

2022 FIFA World Cup Qatar, which will unite people from different cultures by dealing with the hundreds of thousands of fans coming to Qatar from different countries of the world, which will create a public space for cultural dialogue among all peoples as it promotes peace in the region in the Middle East and in the World.

Chief Strategic Planning Officer of Qatar Museums Khalid Al Ibrahim was one of the speakers at Panel Discussion “Urbi et orbi: Experience of Changing the Environment through Cultural Objects” and talked about the different ways in which art has changed the way a city looks and has also influenced the lives of those that inhabit the cities, along with a discussion on how investors can be attracted to a region and its cultural treasures. ‘cultural branding’ was another topic discussed in this region and how a particular region or country may be recognized because of a particular brand like the ‘ushkanka hats’ in Russia or the ‘white thobe’ in the Gulf region.

Acting director for exhibitions at Qatar Museums Sheikha Reem Al-Thani was one of the panelists at the Panel Discussion on ‘Creative Spaces in the Urban Environment’ at the Hermitage General Staff Building (White Hall) and talked about whether cities around the world really needed creative spaces and whether these creative spaces could help develop territories and attract people.

Executive Director of Qatar National Library Dr. Sohair Wastawy highlighted the role of traditional libraries at the Panel Discussion on 'Future of Libraries and Libraries of the Future' at Manege Central Exhibition Hall and how they will continue to flourish, even in this digital age where digital libraries are becoming increasingly common because libraries within societies gather people together so they can gain knowledge through collective learning.

Famous musician and singer Dana Al Fardan talked about her music and how it has been motivated by Qatari marine art and classical music at the Discussion Session at St. Petersburg State University.

CEO of Qatar Business Incubation Center Aysha Al Mudahka discussed the role of entrepreneurship in cultural organisations and how individuals and artists can work towards setting up fruitful partnerships at the Discussion Session on Entrepreneurship.