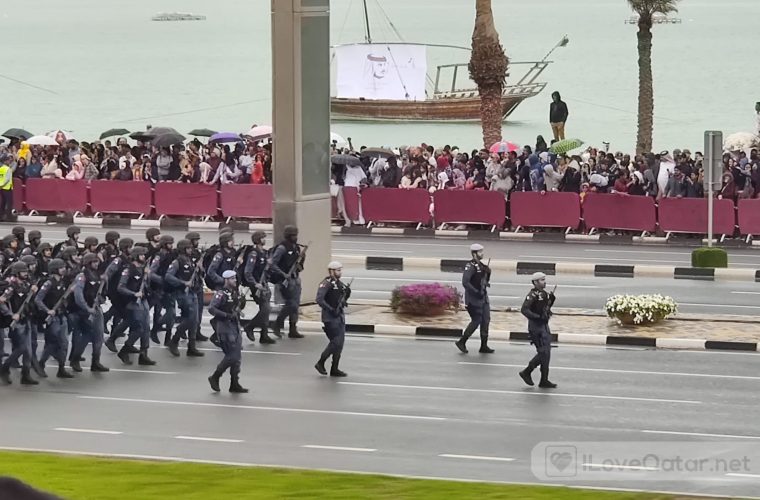 This year's National Day may have started with gloomy weather, but that did not dampen the love and loyalty of citizens and residents for Qatar. People flocked to the Corniche, decorated in national colors, to watch the National Parade which started at 9:30 am.

H. H. The Amir Sheikh Tamim bin Hamad Al Thani and H. H. The Father Amir Sheikh Hamad bin Khalifa Al Thani were both in attendance along with other dignitaries.

18 cannon rounds were fired to commemorate the country's unification by The Founder, Sheikh Jassim bin Mohammed bin Thani on the same day of 1878.

While the different branches of Qatar's Military and Civil Defense were marching, spectators were also able to witness air show by different military aircraft which showered the sky in national colors. Camels and horses were also present along with various armoured military vehicles.

Spectators were also able to watch the parade through the giant screens installed along the route.

His Highness The Amir was also seen greeting people and singing kids after the parade. Yesterday evening, he participated in the Ardat Hal Qatar even when while it was raining at the Amiri Diwan Yard as part of the National Day celebrations.

Due to the weather, parachute jumping was canceled.

National Day celebrations have started as early as last Thursday at Darb Al Saai. Aside from the parade, there is still a host of activities lined up for today in different locations such as Aspire, Katara, Darb Al Saai, Asian Town, Barwa Al Baraha, Wakra Stadium, Souq Waqif, and more. Check here for the list of Qatar National Day events. You can also find them here.

Doha Metro's three lines are all now up and running, making it easier for residents to go around Qatar to enjoy the National Day festivities. On this glorious occasion, Qatar Rail has also decided to extend operating hours until 1 AM until December 21.

The fireworks at Corniche is scheduled at 8 pm today.

Stay tuned for the latest updates on our Instagram: https://www.instagram.com/ilqlive/

Did you watch the parade? Where are you celebrating QND next? Please don't forget to hit LIKE and SHARE! It keeps us going! :)