Qatar Museums (QM), under the patronage of its Chairperson, Her Excellency Sheikha Al Mayassa bint Hamad bin Khalifa Al Thani, and Hamad International Airport (HIA) are proud to announce the unveiling of a number of new public art installations by both Qatari and international artists at the airport. 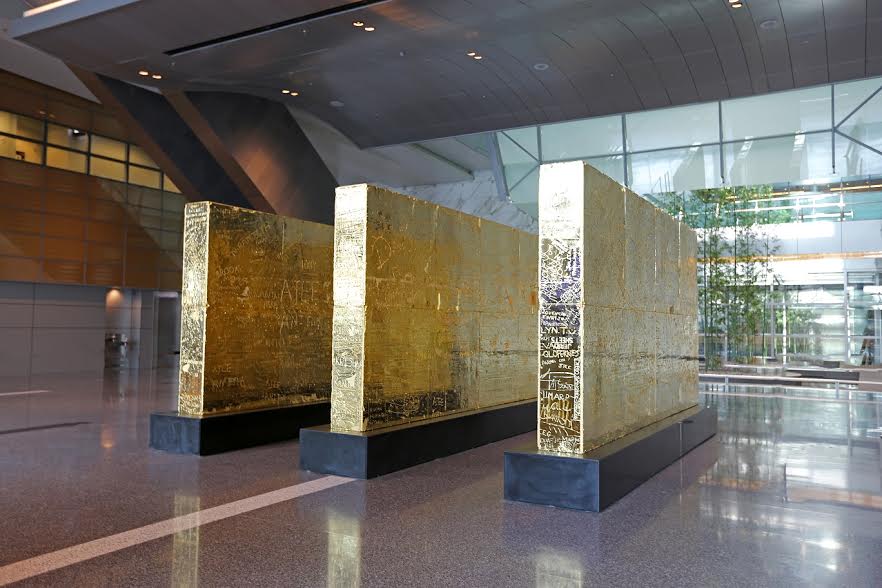 QM has installed two new permanent pieces which are now on display for passengers and visitors to enjoy at the airport: “Arctic Nurseries of El Dorado” by British artist Marc Quinn, and “Untitled” by Italian artist Rudolf Stingel. In addition, an unconventional sculpture of the iconic desert horse by acclaimed Qatari artist Ali Hassan is set to be installed in HIA in the first quarter of 2016, Hassan’s third piece to go on show at the airport.

The new pieces will join the growing collection of sculptures and images by Qatari and international artists at the airport, including works by four Qatari artists: Amal Al Raban, Ali Hassan, Mubarak Al Malik and Salman Al Malik, in the Oryx and Al Maha lounges. A number of further artworks are also planned for installation at the airport in the coming weeks and months. This makes HIA a space where art and architecture combine to create an immersive visual environment, which provides a unique experience for the passengers and visitors at HIA.

Mansoor bin Ebrahim Al Mahmoud, Acting Chief Executive Officer of Qatar Museums, said: “QM continues to place art by local, regional and international artists in prominent public spaces throughout Qatar. The art at HIA inspires millions of visitors, residents and transfer passengers who fly through the airport each year, and it proves that art can be enjoyed far beyond the confines of an art gallery. These newest works in HIA signify the latest chapter in our vision at Qatar Museums to continue to bring world-class art to our people.”

Engr. Badr Mohammed Al Meer, Chief Operating Officer at HIA said: “HIA prides itself for being an innovative exhibition space. Art is an integral part of HIA, having been designed to house permanent and temporary exhibitions. Passengers are exposed to a diverse set of artistic media including paintings, sculpture, electronic and interactive installations. Our airport terminal is a public space that welcomes millions of people every year and is therefore an ideal space to interact with art. The exposure that such a venue gives artists, especially budding Qatari artists, is exceptional.”

Marc Quinn’s mesmerising artwork “The Nurseries of El Dorado” is a representation of an almost mythical world. Comprising of a number of bronze sculptures, Quinn creates a series of hybrid plants by taking elements from different vegetation and carefully piecing them together, before casting them in bronze.

Rudolf Stingel’s work reflects on the passage of time. His artwork at HIA is a sample of one of his famous large-scale interactive pieces. Stingel covered three surfaces with reflective, aluminium-faced insulation panels, before inviting members of the construction team at HIA to draw on the soft walls at the time of the airport’s construction. The walls were then cast in copper and electroplated with gold, before a number of pieces were selected for permanent display at HIA.

Ali Hassan’s sculptural artwork at HIA will be an unconventional interpretation of the iconic desert horse, represented by different forms of the Arabic letter “ن” (“n”). Hassan used a range of intricate sculpting techniques to create the magnificent 8m x 6m sculpture.

QM has worked with local, regional and international artists for over five years to commission and acquire artworks for key locations in and around Hamad International Airport. The art comprises a mix of site-specific creations as well as pieces which have been carefully selected for the airport. The first international installation, “Lamp Bear” by Swiss artist Urs Fischer, was installed in a prominent location in the centre of the airport, and Dutch artist Tom Claassen produced a series of sculptures of the Oryx, an antelope native to the Arabian Peninsula, which appear as a herd in the arrivals hall of the airport.

Public Art is a central programme in QM’s mission to push the boundaries of the traditional museum model and to offer cultural experiences in public spaces. The art installed at Hamad International Airport supports this goal as well as the pillars of Qatar’s National Vision 2030 of education and engagement with Qatari society