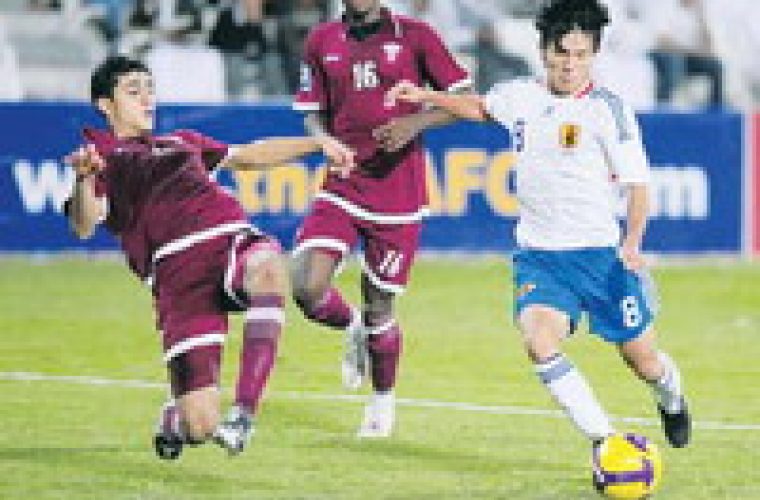 Four days ago, Japan arrived in Doha seeking their first win against Qatar. Takeshi Okada-coached Japan did just that as the visiting side hammered Qatar 3-0 in their 2010 FIFA World Cup qualifying match at a packed Al Sadd Stadium yesterday. Japan, a powerhouse in Asia with World Cup experience, scored thrice to post their maiden win against Qatar in six meetings. Goals by midfielder Tatsuya Tanaka, striker Keiji Tamada and defender Marcus Tanaka easily helped Japan score three points in their Asian Zone Group A match. With yesterday’s win, Japan have seven points from three matches. Qatar are in third place with four points from as many matches. Australia lead the group with nine points from three games. Japan took the lead due to poor defending by the home team’s goalkeeper in the 19th minute. After receiving a pass from Makoto Hasebe on the right flank, an unmarked Tanaka quickly slipped the ball between the legs of goalkeeper Saqr on the first attempt. Showing better understanding against the hosts, Japan doubled their advantage through striker Tamada in the 47th minute. Tamada, after a receiving a pass from Tanaka, fired a left-foot bullet from the edge of the Qatar box, a shot that a diving goalkeeper Saqr could only watch sail into the net. In the 67th minute, Japan went 3-0 up with a superbly taken header by Tanaka. An indirect corner kick was headed home by the tall defender, who jumped higher than three Qatari defenders for his side’s third goal after receiving the ball from midfielder Shunsuke Nakamura. In the other Asian World Cup qualifers yesterday, Australia beat Bahrain 1-0 in Manama, South Korea beat Saudi Arabia 2-0 in Riyadh and Iran drew 1-1 with United Arab Emirates in Dubai. The Pen Note, The Peninsula's title was originally Japan hammers Qatar. What national newspaper has that sort of a title about its own country. Eh Rizwan Rehmat? The article talks like an outside on Qatar. I guess that's what happens when you have an indifferent writer that doesn't know how to convey the passion of the country.