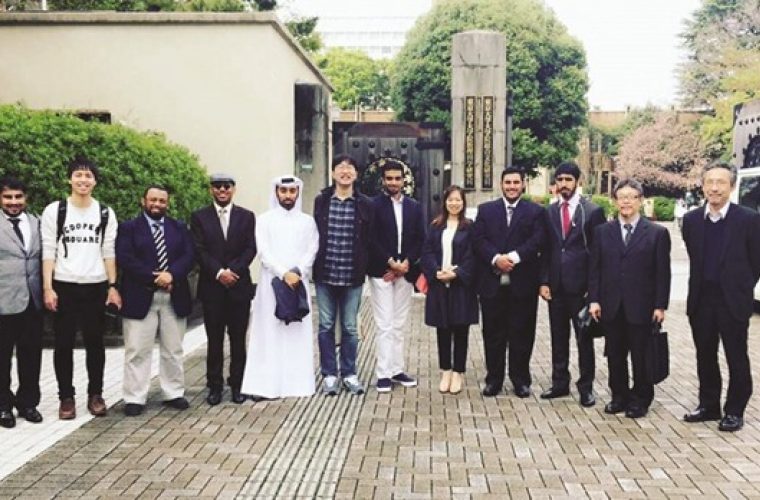 The College of Arts and Sciences at Qatar University (QU-CAS), in collaboration with Japanese company Marubeni Corporation, organised a 10-day cultural study trip to Japan.
CAS students visited historical and cultural attractions in Tokyo and Kyoto during the tour.
The trip included students Ahmed al-Jaber, Ibrahim al-Abdullah, Talal Alshamri and Abdulhadi Almarri from the Department of International Affairs, Abdullah al-Qahtani from the Biological and Environmental Sciences Department, Musaab Othman Alkhtib from the Gulf Studies Centre and Abdullah Hamad Fetais from the Mass Communication Department. Also part of the group was associate dean for outreach & engagement Dr Khalifa Alhazaa.
The group visited the Marubeni headquarters in Tokyo where Koki Kitagawa, general manager, Regional Co-ordination and Administration Department; Kazuhiro Konishi, general manager, Middle East & Africa Team, Regional Co-ordination and Administration Department; and Shohei Nagai, assistant general manager, Regional Co-ordination and Administration Department, welcomed them for a meeting, followed by a reception held in their honour. It was attended by a number of company officials.
One of the highlights of the trip distinguishing it from the previous year’s was the cultural courses delivered by professors from Tokyo University like Dr Namie Tsujigami. Students learned, over three consecutive days, about topics such as the role of women in the Japanese society, the structural organisation of Japanese companies and contemporary Japanese literature through some passages from the works of the Japanese novelist, Haruki Murakami.
The group visited many ancient and modern landmarks such as the Asakusa area, the Edo-Tokyo Museum in Tokyo and Kinkakuji and Toji temples in Kyoto.
CAS dean Dr Eiman Mustafawi expressed her thanks to Marubeni, saying: “This visit gave our students not only good insight into a different culture but also provided them with broad-based benefits and outcomes.”
Thanking Marubeni for its hospitality, Dr al-Hazaa said: “Our students visited different cities and key landmarks in Japan. They observed a lot of Japanese culture.”
Student Abdullah Qasim al-Qahtani said, “This trip made me realise how Japanese people are very much dedicated to their work life. As an Environmental Sciences student, I benefited from their eco-friendly lifestyle.”
The trip was part of an agreement signed in 2012 with Marubeni, which established a $6mn endowment at CAS over a five-year period. The largest ever received by QU, the donation established three faculty positions, student cultural exchanges and a student work experience programme at Marubeni’s Tokyo headquarters. (Source)