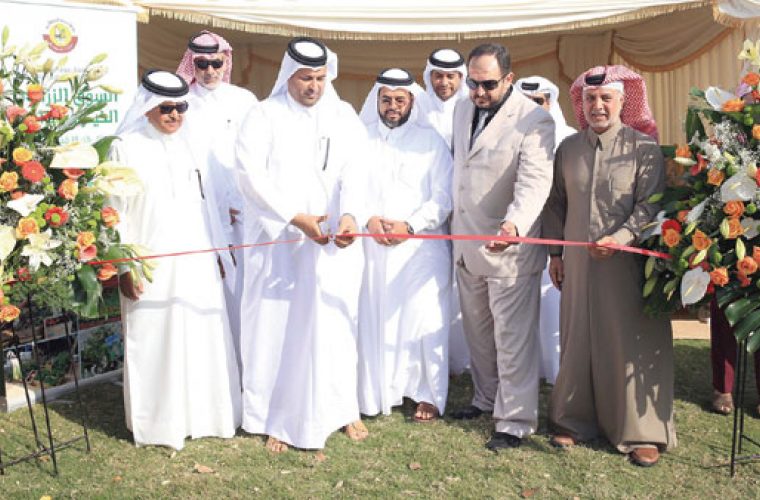 Qatar Green Centre (QGC) of the Ministry of Environment (MoE) yesterday inaugurated the fourth Agriculture Charity Fair at Aspire Park for the benefit of Syrian refugees.

The three-day event has been organised in co-operation with Qatar Charity (QC). The opening of the fair came as part of the MoE’s celebrations for Qatar Environment Day.

The event, sponsored by HE the Minister of Environment Ahmed Amer Mohamed al-Humaidi, was launched by Sheikh Dr Faleh bin Nasser al-Thani, director-general of the Agricultural Research and Development Department at the MoE.

More than 20 companies and organisations specialising in agricultural products, the food industry and environmental affairs are taking part in the fair. Also, several QC donation collectors have been deployed at the fair, which features a special corner for QC charity projects where the goods of producing families are on display.

“This fair is an outcome of the MoE’s steadfast belief in the importance of charity and humanitarian work and in accordance with the role played by Qatar in this field. It also follows the ‘No lost generation’ initiative launched by Unicef, which aims to protect children against violence and violation of their rights,” Sheikh Dr Faleh said after inaugurating the fair.

He added that profits earned from the fair would be directed to various humanitarian entities to address the needs of distressed people. He also thanked QC for its active role in such events to offer timely help to the Syrian people.

“This is the fourth fair of its kind. It provides a platform for companies and interested entities to be active partners in charity work for the benefit of the needy within and outside Qatar,” said Abdulla Mohamed al-Kuwari, QGC director.

The participants affirmed that the fair is a good opportunity to display their products and introduce their activities to the people while taking part in the promotion of noble and philanthropic initiatives.