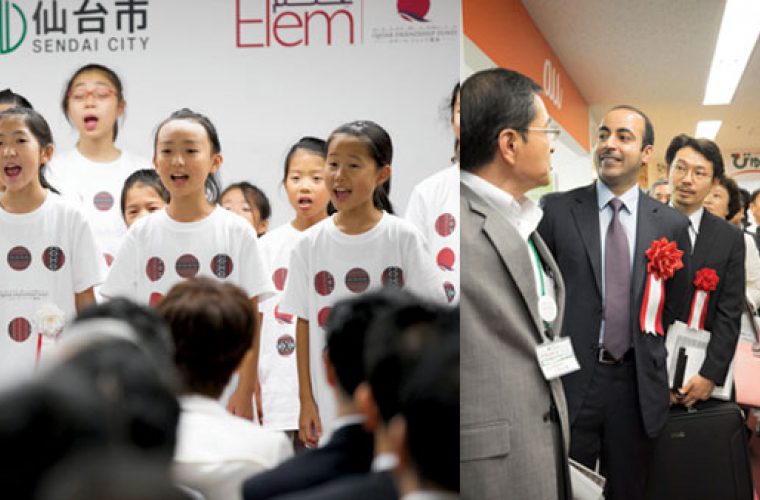 The centre is one of 10 projects initiated by QFF as part of the $100mn assistance extended by Qatar to the Japanese people to help communities affected by the 2011 Great East Japan Earthquake and Tsunami.

As the second centre built under the “Elem” initiative, the Elem Sendai centre follows the launch of Elem Iwaki earlier in the year.

Together with Elem Iwaki, Elem Sendai’s “state-of-the-art” simulators will allow up to 25,000 visiting school students from the Tohoku region to spend a day making important life choices as adult citizens.

With Japan suffering $309bn in damage to its economy and infrastructure, the centre is also intended to restore hope to a region that lost 15,884 lives following the devastating 9.0 magnitude earthquake and tsunami that struck the east coast of Japan in March 2011.

The facility was funded by a $1.4mn grant from QFF and built in partnership with Junior Achievement - a non-profit organisation teaching youth about the value of enterprise through educational programmes.

Hassen al-Hummaidi - on behalf of Qatar’s ambassador to Japan Yousef Bilal, who is also the head of QFF - handed over the keys of the centre to Japanese officials.

The event was attended by Emiko Okuyama, mayor of Sendai, and representatives from the Junior Achievement foundation.

In a statement on this occasion, ambassador Bilal described Sendai as a dynamic city in Miyagi prefecture, stressing that the young population of Sendai and its surrounding areas contribute around $700mn to Japanese economy.

“This prefecture was a key contributor to local economy before the earthquake that struck Japan in March of 2011,” he added.

He pointed out that the centre was built through the support extended by Qatar to Japan to encourage those living in this part of the country, noting that such support was a clear indication of the close relations between the two countries, which date back to more than 40 years.

“Our relations with Japan have been growing day by day,” the envoy said, adding that Qatar was one of the first countries that responded to appeals for relief assistance in the wake of the disaster in March 2011.

Further, he said students at the Sendai centre would learn more about this special friendship between the two countries, which is based on strong trade links and has expanded to include many other areas such as research and development, culture and sports.

Qatar’s ambassador to Japan Yousef Bilal has praised fishermen from a part of Tohuku region in Japan for their achievements.

Local fishermen in Kamaishi city have been commended for what ambassador Bilal has called a “touching and inspiring” story, after it was revealed that an innovative project designed to assist in rebuilding the region’s fisheries has recorded sales of over $1.8mn since its launch.

Following the widespread devastation caused to the industry by the 2011 Great East Japan Earthquake, the Qatar Friendship Fund (QFF) responded by granting $1.2mn for the construction of a new facility in the city, allowing fishermen to use advanced freezing technologies in storing and transporting their seafood products.

Together with the Kamaishi Hikari Foods Company, the project had originally been intended to reach around 2,500 people. Having exceeded targets by almost 400%, Bilal said he expected the success of the Kamaishi fishermen to spread throughout the region and inspire others to follow their example.

“The people of Tohoku region can be proud of their fishermen. Their dedication to putting food on the tables of millions of homes and the dignity with which they have picked themselves up after such a tragedy is both touching and inspiring,” the ambassador said.

“In just a few years, we have seen countless examples of courage: of people doing not only what is necessary, but also going beyond what is expected. These efforts are reflected in the faces of the Kamaishi fishermen and the many others whose remarkable stories will no doubt restore hope and inspire generations to come,” he stressed.

The announcement was made ahead of the launch of QFF’s latest project - a new education centre that will teach financial literacy, career planning and citizenship to the next generation of Japanese youth in Sendai city.

As the second centre built under the “Elem” initiative, the Elem Sendai centre follows the launch of Elem Iwaki earlier in the year.

As Japan’s 11th largest city with an average age of 38 in a country where 40% of the population would be over 65 by 2020, Sendai was an obvious choice to house the pioneering education programme, Bilal noted.

The launch was held earlier this week.