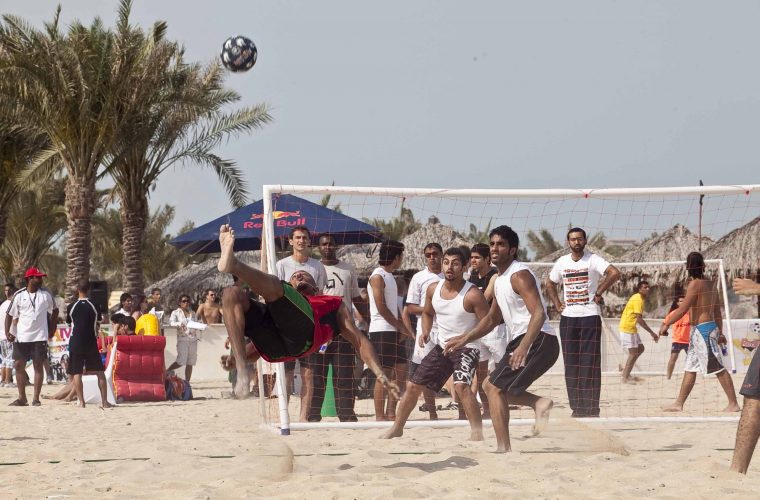 This Friday on the sparkling white sands of the Intercontinental Beach, Qatar saw football as never before; Red Bull Double Kick style. Onlookers, charged with the event's electrifying atmosphere, cheered themselves hoarse as 288 gladiators from all corners of the world battled their way through action-packed bouts of beach soccer, in which goals could only be scored using a double kick. This is a mid-air kick that connects with the ball whilst the player’s body is parallel to the ground. In the blistering heat of the midday sun, the 10 minute rounds were short but intense as the competing teams fought exhaustion and the onslaught of their opponents in a game that embodied the best aspects of beach soccer. Matches were characterized by fast-paced volleys, brutal challenges, and crowd-pleasing aerial-acrobatics as players soared through the air in an effort to score double-kick goals. Out of the 96 teams in the starting line-up, comprising almost 300 participants in all, two teams made it to the tournament final and battled it out for the accolade of Red Bull Double Kick champions, plus a purse of 6000 riyals. Teams LGS and UPF 9 were locked in a head-to-head fight to the finish. LGS team captain Abdullah Ahmed, along with running mates Shahab Usmani and Gustavo Pulgar, delighted the crowds with pile drivers and bicycle kicks that would have put martial arts legend Jackie Chan to shame. Ultimately LGS were victorious, winning the final with a score of 1 – 0. ‘I feel great,’ said Abdullah, ‘We didn’t expect to win! We came to have fun and enjoy a day at the beach, but we went all the way.’ Speaking about his team’s preparation for the event, Abdullah, who is a freshman at Qatar Foundation’s Texas A&M, said in a frank statement: ‘We have never played beach soccer or double kicked before. Plus we all had exams, and so couldn’t prepare for this event. But we will train hard and come back next year to defend our title.’ The event was hosted by Red Bull and the Intercontinental Hotel in partnership with Vodafone and Gosport. Virgin, for its part, donated some great prizes for 2nd and 3rd place, which were secured by UPF 9 and Manchester respectively. The event is set to take place on an annual basis. ILQ News