Qatar flag recognised as largest in the world 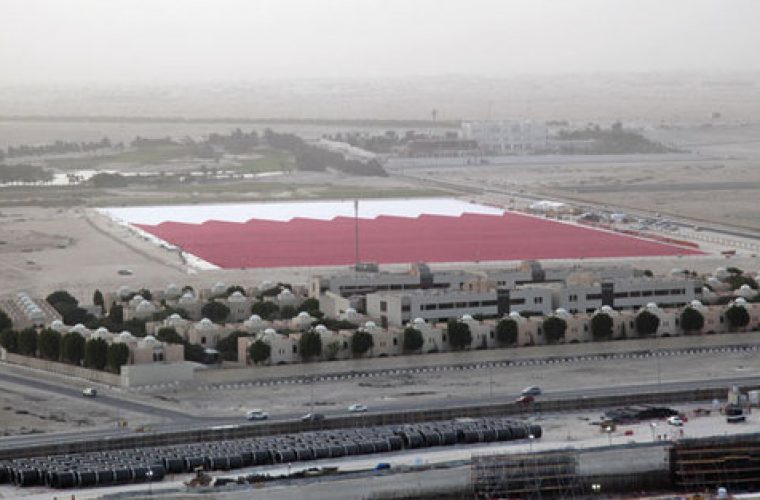 As the country gears up for National Day celebrations, a Qatar national flag measuring 101,000+sqm was yesterday recognised by the Guinness World Records as the largest flag in the world, beating current record holder Romania, which created a 79,000sqm flag last year. The flag, described as the “Flag of Gratitude and Loyalty”, is currently spread across a large area on the outskirts of the capital. The announcement was made in the presence of a huge gathering of Qatari citizens at a glittering ceremony held at the Katara amphitheatre. A Guinness World Records official flown in from the UK presented the certificate of recognition to a representative of the “Flag of Gratitude and Loyalty” team at the event. Speaking about the flag, the Guinness World Records official said: “This is a big challenge and one of the most difficult records I have seen. The record grew many times from 1976 and the current record to break is almost 80,000sqm. It was established in Romania last year with a flag that set the record of 79,000sqm.” He described the Qatari flag as “a very large engineering project involving a lot of challenges”, which must follow the Guinness World Records guidelines. “More than 2,000 people have taken part in this project, which is supported by Brooq Qatari Magazine and Katara. Yesterday, I went to see the flag on location and was impressed by the quality of manufacturing, stitching, material and quality of fabric - all were of very high standards, as well as the participation of the people involved as nobody wanted to leave after the work was done. The flag means so much to them than just its size,” he pointed out before announcing the size of the flag. The audience at the unveiling event were later serenaded by the Qatar Armed Forces orchestra. http://www.gulf-times.com/qatar/178/details/374890/qatar-flag-recognised-as-largest-in-the-world