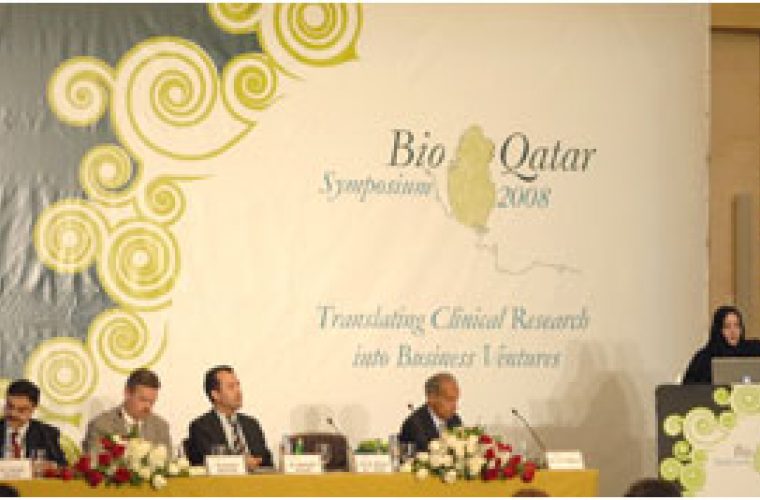 QATAR is keen on working in partnership with internationally recognised centres of excellence to advance its ever-evolving biomedical research efforts, Minister of Health HE Dr Sheikha Ghalia bint Mohamed bin Hamad al-Thani said yesterday. The minister was speaking on ‘Evolving Opportunities and Emerging Strategies for the Healthcare System in Qatar’ during a session at the BioQatar Symposium 2008: Translating Clinical Research into Business Ventures, which began yesterday. “We have realised the significant role of biomedical research and we want to ensure that we are not just delving into it in details but also seeing to it that notable expertise is attracted to our projects,” she said. She highlighted high points of some recently launched initiatives in the country which included Qatar Vision 2030, Qatar Health and Wellness 2010, World Health Survey on Qatar, Qatar Health Strategy, Health Promotion, the Primary Healthcare and Wellness model as well as biomedical research. The minister noted that health challenges in Qatar were unique due mainly to the diverse backgrounds of the country’s workforce. The National Health Authority was making efforts to develop and implement research policies and guidelines aimed at tackling those challenges, she said. According to Sheikha Ghalia, the health authority is currently looking at the best practices all over the world to draw examples in terms of health promotion and awareness. “Right now, we are focusing on health promotion, to raise awareness about healthy living, personal healthcare and change in lifestyle among people, especially the youths,” she said. The minister also touched on the authority’s plans to deal with genetic problems and other issues posed by consanguineous marriages as well as cancer control, saying both issues deserve a holistic approach. She said a number of health strategies, including mental health, were also in progress. “Here in Qatar, we are supporting the international plan on curbing the rise in incidence of neurological disorder and psychiatry cases seen globally as we have come to realise that there is a need to promote mental health facility right from the community, primary healthcare all the way up to secondary and tertiary healthcare levels,” she said. In opening remarks, Qatar Foundation president Dr Fathy Saoud explained the foundation’s vision of becoming a scientific centre of excellence. “Qatar’s leadership always has a vision that the true wealth of a country is its people and the mission of the QF is to accelerate the means of achieving quality human development,” he said. He said QF had launched research programmes which focused on the basis of biomedical research in medical institutions such as Weill Cornell Medical College-Qatar and the Sidra Medical Centre proposed to be inaugurated in 2011. “We hope that this programme will develop sustainable efforts, which will support high quality research in molecular technology, healthcare for women and children as well as in stem cell research,” he said. Saoud recalled that in the past two years QF had been working on the creation of research excellence, which he said had been possible through the support of HH the Emir Sheikh Hamad bin Khalifa al-Thani. “We have put in place research strategies comprising fundamental, applied and technological research, which will focus on three broad areas namely energy - renewable and non-renewable - environmental and biomedical research and discussions are already under way with a number of institutions to establish programmes in QF,” he said. The BioQatar 2008 Symposium, focusing on cancer and diabetes, was jointly organised by the QF and Qatar Science and Technology Park (QSTP) with the aim of creating research and business partnerships in biotechnology. GT