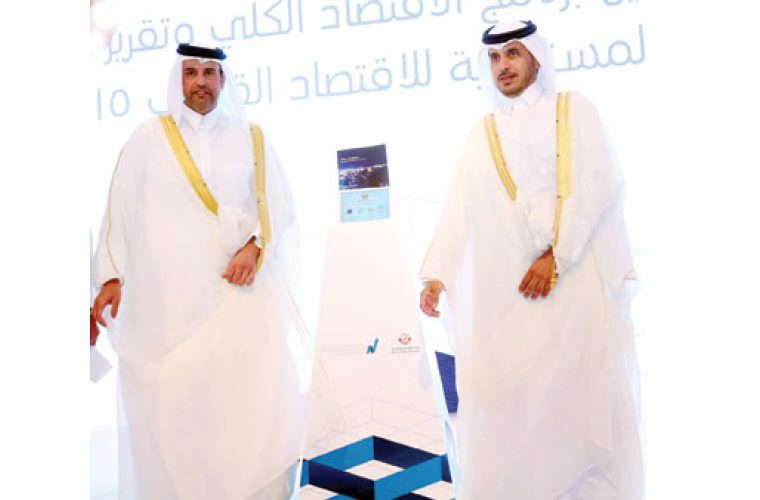 Qatar expects a “steady” decline of migrants in the coming years as the current employment rates are set to plateau, thus putting higher diversification and productivity growth more in the forefront, according to the Ministry of Economy and Commerce (MEC).
The 2000s were a period of “extraordinary” demographic change in Qatar with the migrant population increasing by 155,000 between 2000 and 2005 and by an “unprecedented” 800,000 from 2005 to 2010, said the new macroeconomic model of the MEC, which was unveiled yesterday by HE the Prime Minister and Minister of Interior Sheikh Abdullah bin Nasser bin Khalifa al-Thani. HE the Minister of Economy and Commerce Sheikh Ahmed bin Jassim bin Mohamed al-Thani was among those present.
The influx of workers and expatriates from all walks life into Qatar resulted in a “dramatic” expansion of the working-age population, a trend which continued with the arrival of another estimated half a million people expected between 2010 and 2015, said the model, which presented four scenarios - True Diversification, Lost Advantage, Energy Plus and New Pocket - based on the outcome of global growth and domestic competitiveness.
“In the coming years, our scenarios predict a steady decline of migrants,” it said, adding with this massive growth engine slowing, diversification and productivity growth will further increase in importance as the key growth drivers to 2030.
“Current employment rates of nearly 75% are expected to plateau in the next few years before coming down over the outlook period (2015-30) as the supply of labour diminishes,” the model said.
Most of the increase in Qatar’s population from 25-64 (years) has come from international immigration, the cohort will continue to expand albeit more slowly over the next 10 years as immigration is expected to slow, it said.
The upside scenarios of true diversification and new pockets (which assume the global economy and oil prices as relatively strong) see employment remaining the same of expanding by 1% from their current values but the downside scenarios of lost advantage and energy plus (which assume the global economy and oil prices as relatively soft) predict a potentially larger drop of 3% to 4% overall.
“Given a decline is expected across scenarios, it will become imperative to slow the expected decline in the share of employed in order to give enough time for productivity to become a stronger growth engine,” MEC said.
By 2030, the difference between the energy plus and new pockets scenarios would amount to some 3% of the population or around 400,000 less employed generating output.
“Qatar could still enjoy an employee pool of almost 2.2mn workers by 2030 though the downside could mean 570,000 fewer,” the model said.
On wages, MEC model said diversifying without a concurrent upswing in global energy sees lower wage growth, driving down average wages, it added.
Since the lost advantage and energy plus scenarios see a contraction in employment of 3% to 4% between 2014 and 2030, average wages do not see a deeper drop that may otherwise have been expected, purely due to employment factors, it said.
True diversification and new pockets scenarios also imply higher productivity growth, which in turn should push wages further and by extension, consumption, a driver of gross domestic product growth, it said.