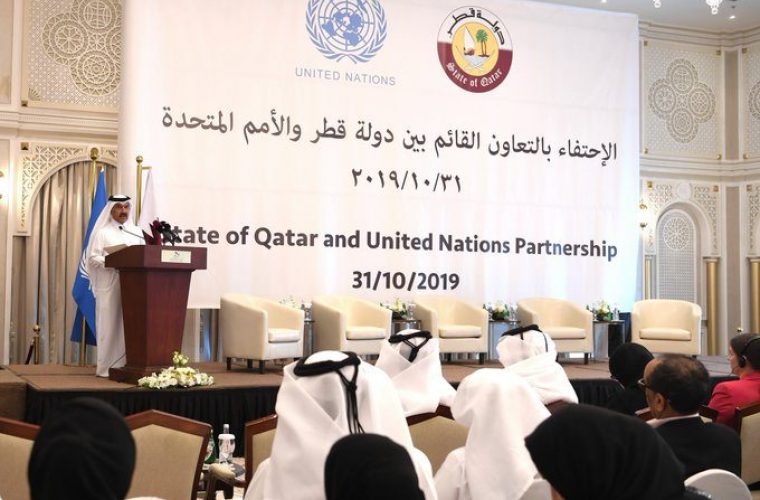 The Ministry of Foreign Affairs, in partnership with the Qatar National Commission for Education, Culture and Science, organized a celebration on the occasion of United Nations Day, which falls on the 24th of October each year.

The ceremony, which was held today at the Diplomatic Club, was attended by HE Secretary General at the Ministry of Foreign Affairs Dr. Ahmad Hassan Al-Hamadi, and HE United Nations Secretary-General's Humanitarian Envoy Dr. Ahmed Al Meraikhi, the Director of the UNESCO Office in Doha Anna Paolini, and a number of officials at the Ministry of Foreign Affairs and representatives of civil society and social and charitable institutions.

In a speech at the beginning of the ceremony, HE Secretary General at the Ministry of Foreign Affairs Dr. Ahmad Hassan Al-Hamadi said that this celebration is a pride and a culmination of the achievements of the distinguished partnership between the State of Qatar and the United Nations, as well as the completion of the celebration of the United Nations Day, which was held in New York last week under the auspices of Qatar and this celebration also expresses pride in the achievement of the partnership between the two parties in the history of international relations in particular and in human life in general.

His Excellency also valued the strategic partnership between Qatar and the United Nations which has worked to achieve its objectives, including the maintenance of international peace and security, supporting international development efforts, promoting and consolidating human rights and providing humanitarian relief, as well as participating in collective efforts and initiatives to address the current and emerging challenges facing the world.

His Excellency stressed Qatar's commitment to the United Nations through its continued generous financial contributions to many organs of the Organization, the opening of several United Nations offices in Doha, in addition to the active participation of the State of Qatar in the United Nations meetings and collective efforts to promote interfaith dialogue, support the Alliance of Civilizations, protect human rights in Qatar and abroad, and participate in decision-making by financing development, relief and reconstruction.

His Excellency stressed that Qatar's support to the United Nations stems from its firm belief in the ability of the Organization to overcome international crises through its work to achieve international peace and security, combating terrorism and achieving the goals of sustainable development, and to face common challenges, especially the challenges of climate and climate change, which Qatar has supported the United Nations plans to address them.

For her part, Secretary-General of the Qatar National Committee for Education, Culture and Science Dr. Hamda Al-Sulaiti said in her speech during the ceremony, that the purpose of this celebration is to remind the world of the importance and necessity of activating and strengthening the role of this organization in order to achieve the goals for which it was founded on the twenty-fourth of October 1945 to achieve security and international peace.

Dr. Al-Sulaiti praised the success achieved by the United Nations over the long years, represented in many achievements in the political, economic, social, humanitarian, environmental, cultural and educational fields., adding that this has contributed to the independence of many countries and the resolution of political differences between other countries, in addition to development and technical assistance provided to developing countries to help them to invest their natural resources, and to develop their national and human resources and development projects and care for human rights in the areas of health, education and culture.

Dr. Al-Sulaiti called on the United Nations to introduce radical reforms in all its institutions and bodies so that its decisions have credibility and influence away from the domination of some states and the Organization shall have the greatest and effective role in ending the scourge of wars, famines and international conflicts and in achieving respect for the sovereignty and territorial integrity of States.

She added that from this point of view, from January 2020, UN-75 will launch dialogues at all levels, from classrooms to administrative boards, from parliaments to municipal councils with the aim of reaching as many people as possible, to listen to their hopes and fears, to benefit from their thoughts and experiences.

Dr. Al-Sulaiti pointed out to the State of Qatar's assistance and humanitarian and development assistance to the bodies, institutions and offices of the United Nations in the world to support and promote its objectives in its areas of work, which contributed to the construction of educational institutions and schools in poor countries in Asia and Africa, and this has provided educational opportunities for millions of children around the world and shared money and expertise in combating infectious diseases in conflict zones.