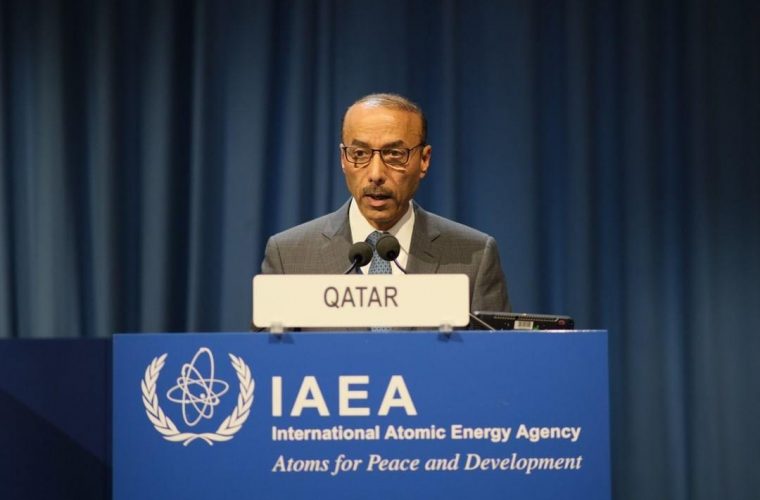 The State of Qatar has underlined the importance of applying the highest standards of nuclear safety by the State that establishes nuclear facilities in accordance with the IAEA's approved work plan and take measures to develop contingency plans for a possible nuclear accident and ensure the implementation of preventive measures for facility personnel, the civilians and the preservation of the environment, so as to ensure the development of technologies for the safe use of nuclear energy.

This came in a speech delivered by H.E. Sultan bin Salmeen Al Mansouri, Permanent Representative of the State of Qatar to the United Nations organizations in Vienna, and head of its delegation to the 63rd session of the General Conference of the International Atomic Energy Agency (IAEA), currently being held in Vienna.

His Excellency also affirmed Qatar's unwavering support for the International Atomic Energy Agency (IAEA) for its distinguished and growing role in harnessing safe and modern nuclear technologies in all peaceful fields to serve humanity by providing a better environment in the fields of energy, treatment, disease control, food and water.

He also praised the IAEA's keenness to benefit from the peaceful applications of nuclear energy under nuclear security and safety systems and to help developing countries to benefit from this energy in a way that contributes to achieving the goals of 2030 Agenda for Sustainable Development.

He highlighted the State of Qatar's interest in cooperating with the International Atomic Energy Agency (IAEA) and benefiting from its technical cooperation programs, building capacities in the field of peaceful nuclear technology through the development of the State's infrastructure, the preparation of qualified personnel, and the issuance of national legislation in the nuclear field.

He expressed Qatar's hope to expand cooperation and partnership with the Agency in various technical projects, especially after the State of Qatar issued Law No. (3) of 2018 on the national system for the inventory and control of nuclear materials, which is currently underway in order to prepare the executive decision on the law.

His Excellency noted that many countries in the Middle East are concerned about the safety and security of reactors located within the region, and fear of any possible effects of these reactors resulting from natural disasters or the result of human error or terrorist act.

He also stressed the responsibility of the operator of nuclear reactors under international conventions to cooperate and consult with countries in the vicinity of the nuclear facility to the extent that they are likely to be affected by the facility and to provide them with the necessary information to assess the potential impacts.

H.E. Sultan bin Salmeen Al Mansouri reviewed the efforts to establish a nuclear-weapon-free zone in the Middle East and said that the State of Qatar regretted that these efforts had been hampered by the lack of political will of the international community to implement the 1995 resolution on the establishment of the zone, although that decision was a key factor in reaching consensus on the indefinite extension of the NPT.

"The failure to implement this resolution, which represents a commitment on the part of all States parties to the Treaty, especially the three depositary states that have adopted the resolution, has eroded the credibility of the Treaty and even the non-proliferation system as a whole," he added.

He stressed that the international community today, in light of existing regional and international tensions, is in dire need to re-act to implement this resolution and to establish a Middle East zone free of such weapons as a necessary step towards the universality of the comprehensive safeguards system.

He said the State of Qatar believes that the establishment of this zone represents a comprehensive regional approach to address the problem of nuclear proliferation because the manner of dealing with each country has proved to be selective and discriminatory in dealing from one country to another and causes imbalances in regional powers.

H.E. Sultan bin Salmeen Al Mansouri, Permanent Representative of the State of Qatar to the United Nations organizations in Vienna, concluded his speech by stressing that the State of Qatar is ready to cooperate fully with the Agency as it recognizes the important role it plays in the international peace and security system.