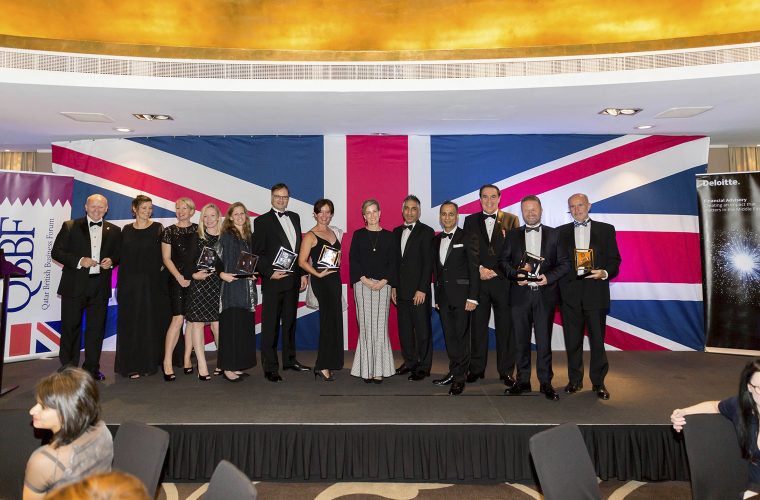 Qatar British Business Forum (QBBF), announced the winners of its third annual awards ceremony organised to recognise business excellence and those members of the Qatari community, who have made outstanding contributions in the British community.

The awards ceremony was held at the W Hotel, West Bay, and organised in association with Deloitte & Touche in Qatar, a global professional services firm. The event attendees included Her Royal Highness Sophie, Countess of Wessex, and an audience of valued guests, dignitaries and VIPs. His Excellency the British Ambassador to Qatar Mr. Ajay Sharma CMG was present at the event to help present the awards to the winners.

Speaking at the awards ceremony, His Excellency the British Ambassador to Qatar Mr. Ajay Sharma said:

“I was delighted to help present the awards at the QBBF Awards dinner, alongside Her Royal Highness the Countess of Wessex, and QBBF Chairman Emad Turkman. Every year, these awards are a reminder of the fantastic work so many in the British and Qatari business communities are doing to further the ties between our countries and I was proud to see so many worthy winners.”

The awards are a part of an ongoing series of events and activities designed to promote business opportunities in Qatar and to strengthen commercial ties between the two nations. These initiatives focus on enhancing trade relations between Qatar and the UK. QBBF’s mission is to support local economic diversification as a part of Qatar’s National Vision 2030.

“The introduction of the QBBF awards is set to acknowledge and reward the contributions of the active community members, and their ongoing efforts to further strengthen the bilateral business and trade between the UK and Qatar. For the third consecutive year, the awards continue to draw an overwhelming number of outstanding submissions, making it even a more challenging task for our judging panel to select the award winners.”

The independent judging panel that consisted of a variety of prominent business individuals in the community helped to select the winners in six categories, including; Business Man of the Year, Business Woman of the Year, Organisation of the Year, SME of the Year, Work in the Community, and Special Achievement.

Andrew North was awarded the QBBF Business Man of the Year for his success in growing the start-up company, Protiviti Member Firm Qatar LLC, in a short period of time, and his ongoing contributions in promoting UK businesses; while The QBBF Business Woman of the Year was awarded to Tamara Hasan for her success in growing The International Physiotherapy Centre and The International Medical Centre, and her continuous commitment to improve the access of residents in Qatar to quality healthcare.

As for the QBBF Organisation of the Year, it was awarded to Doha English Speaking School (DESS), the judging panel decided they fit perfectly for the Organisation of the Year category. DESS was recognized for providing outstanding English National Curriculum based primary education to students aged between 3 and 11 years old. A significant number of leading Qataris spent their formative years at DESS including His Highness Sheikh Tamim bin Hamad Al Thani.

The QBBF SME of the Year was awarded to Better By Result (BBR), an interior design company with only 2 full-time employees that continued to thrive and grow in an ever competing market, servicing both SME and multinational companies.

Paws Rescue Qatar (PAWS), a Not-for-Profit Organisation run by several ladies and volunteers rescuing stray and abandoned animals in Qatar, received the QBBF Work in the Community award. Although the organization lacks a large team and big funds, its efforts reflects how much they care about the animals and the achievements made since 2014.

Finally, the QBBF Special Achievement award was received by Mike Lawton, a respected member in Qatar and in the local community. The Regatta Sailing Academy, a one of its kind in Qatar is pioneered by Mike and has been in existence for 21 years, training many adults and children in the sport of sailing. Mike has served with passion and contributed immensely to the Qatari, British and the wider community in Qatar.

Speaking at the awards ceremony, Muhammed Bahemia from Deloitte said:

“We are delighted to support the QBBF Awards which honour the finest business success and recognise the companies, business leaders and teams who have demonstrated outstanding achievements in the British business community. The calibre of this year’s winners shows that businesses in Qatar have a lot to be proud of.”