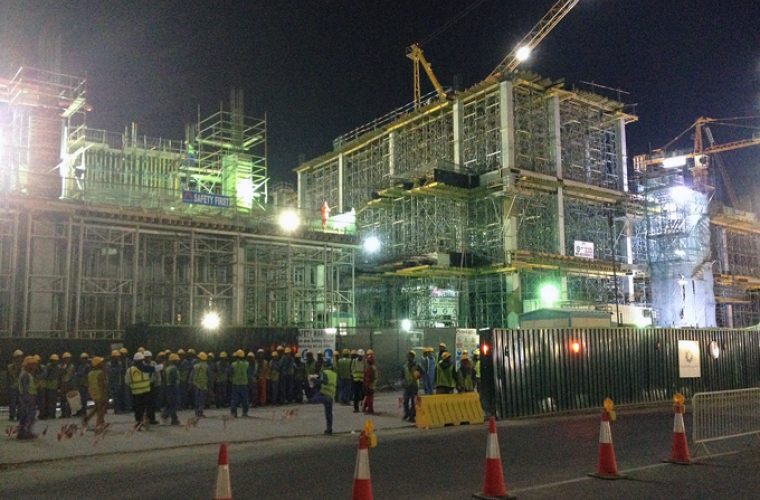 The Qatari government has announced several changes to its controversial labour system amid international criticism of its treatment of foreign workers.

At a joint press conference in Doha on Wednesday, Qatar's Ministries of Interior and Labour released plans to ease restrictions on foreign workers' terms of employment.

The proposals include abolishing the country's "sponsor" system, under which workers are bound to a single employer for the duration of their residence, giving expatriates greater latitude to change jobs and leave the country.

Qatar's exit permit system, in which workers are currently required to obtain their employers' consent before being allowed to leave the country, "will now be replaced with an automated system through the Ministry of Interior", said a press release from the conference.

However, no deadline was set for implementing the proposals.

The proposals to change the labour system must first be evaluated by the Shura Council, Qatar's legislative branch, before being ratified. "We hope that this [the reforms] will be soon, but no timeline has been fixed," said Muhammad Ahmed Al Atiq of the Ministry of Interior at the press conference.

He added that the proposed changes would apply "to all working in Qatar, whether domestic workers or those who work for companies".

Other proposed reforms would require employers to pay wages electronically to improve transparency and timely payments, and would increase the penalty for confiscating workers' passports from 10,000 riyals ($2,700) to 50,000 riyals ($13,700).

Qatar's labour situation has come under close scrutiny since it won its bid to host the 2022 football World Cup. With a small native population, the country has brought in about 1.4 million migrant labourers, concentrated in the construction and service sectors. Only about 10 percent of people over the age of 14 are citizens of Qatar.

Human rights watchdog Amnesty International has said the labour systems prevalent in the Gulf states, known as kefala, creates an "excessively unequal power relationship" between employers and workers, who are not allowed to change jobs or leave the country without their employers' permission.

A report published by Amnesty last November found that migrant workers in the country "face a range of abuses at the hands of their employers", some of which "amount to forced labour and human trafficking".

Some Qatari government officials have expressed the need for reforms. "The sponsorship system was set up at a different time and according to a different demographic composition… but today the situation has changed and due to the flow of the expats, we certainly need to carry out many changes," Sheikh Mohammed Bin Jassim Al Thani, Qatar's assistant minister of foreign affairs, told Al Jazeera's Jamal Elshayyal earlier this month.

Many expatriate labourers in Qatar agree. Joseph, a security guard from Kenya who asked that his real name not be used to protect his identity, told Al Jazeera that workers in Qatar should be able to freely change jobs. "That would increase competition [in the labour market] - and then you get better services," said Joseph, who wants to work in the sales sector but cannot do so.

He added that Qatar should introduce a minimum wage law. "When you look around at all the luxury, definitely they are able to increase the wage." Monthly wages for blue-collar workers in Qatar are often between 800-1,200 riyals a month ($220-$330) for a six-day work week, which can come out to less than $1 an hour.

Little data exist on Qataris' attitudes towards the labour sponsorship system. One 2010 survey found almost half of Qataris wanted the system to be made stricter. Some Qatari business groups have defended the exit visa requirement, saying that non-Qatari partners or employees could suddenly depart the country without repaying loans or business expenses.

Yet some Qatari employers have called for reforms. Dr Ahmed Al Mohannadi, the editor-in-chief of Doha Stadium Plus magazine, said some employers "take advantage of the system", and that it's unfair to prevent workers from leaving for better-paid jobs. "I want people... coming to work to my country to feel proud they are in a very good system, not what we have now," said Al Mohannadi.

Nicholas McGeehan, Human Rights Watch's Gulf researcher, said that although the watchdog group has been very critical of Qatar, the country's authorities have been open compared to other states in the region.

"While some of the measures announced today are positive and if implemented would improve conditions for workers, they do not go nearly far enough," said Amnesty's James Lynch.