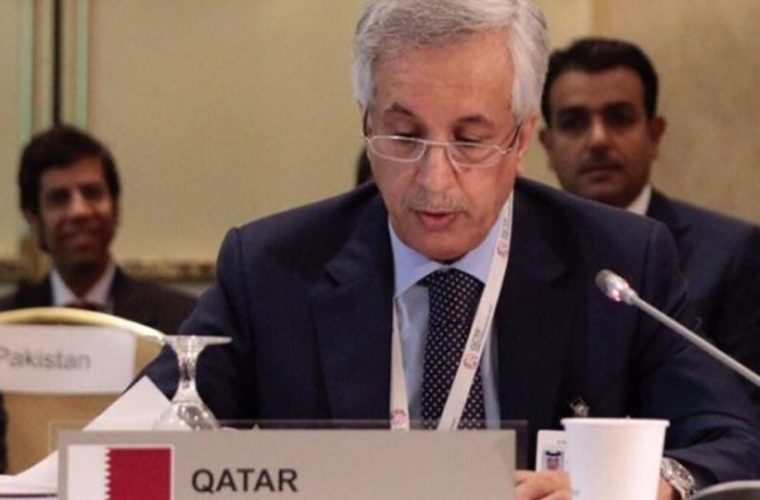 Qatar stressed Sunday that it will continue working as an active partner in the international community to enhance the goals related to humanitarian and developmental work, calling for allocating more resources towards these endeavors.

This came in the statement of Qatar read by His Excellency Minister of State for Foreign Affairs Sultan bin Saad Al Muraikhi in an event on investment in education and employment in the health sector, which took place at the headquarters of the United Nations in New York.

H.E. the Minister of State for Foreign Affairs said that Qatar plays a leading role in realising the sustainable development goals on the local, regional, and international levels through providing assistance in the face of humanitarian and economic challenges and crises.

His Excellency said that Qatar appreciates the election of Her Highness Sheikha Moza bint Nasser as a UN Sustainable Development Goals (SDG) Advocate among 17 prominent persons. His Excellency said that Qatar is first among Arab countries in supporting UN and humanitarian organisation by providing aid and gifts, including the financing of UN organisations with $500 million, which was announced in December 2018.

His Excellency noted the contributions made by civil society organizations in Qatar to sustainable development efforts at the regional and international levels, through providing basic services, humanitarian aid, reconstruction efforts, financing, basic education, and employment opportunities to millions of people around the world. His Excellency noted that the contributions of Education Above All and Qatar Fund for Development reached around $736 million to support healthcare in Africa and the Middle-East in the last six years.

His Excellency also praised the role of Silatech, for the distinguished role it plays in empowering youth through training and job opportunities, as well as by empowering more than 1.3 million young people in 17 countries in the Middle-East North Africa region through the provision of financial services. His Excellency highlighted that Silatech and its partners committed to providing five million job opportunities to young people all over the world by 2022.

H.E. the Minister of State for Foreign Affairs noted that the world today faces many challenges on the economic, humanitarian, developmental, and societal fronts. He expressed regret regarding the lack of jobs in the healthcare sector, saying it was an obstacle to providing good healthcare to people, which leads to critical humanitarian crises. His Excellency stressed the need to deal with this challenge, which could reach 18 million job openings in the healthcare sector worldwide by 2030, in order to realise sustainable development goals. His Excellency also stressed on the importance of ensuring the quality of workers in the healthcare sector through education and training. His Excellency expressed appreciation of the World Health Organisation's (WHO) efforts in dealing with that challenge through comprehensive plans and programs.

His Excellency also welcomed the cooperation between WHO and Silatech on the "Working for Health" programme, which aims to provide 1.9 million job opportunities by 2022 in Africa. The project will be a boost to economic development, given that healthcare is a foundational economic sector that creates jobs that compound the strength of growth, as healthcare has double the employment growth of other economic sectors.

The Director-General of WHO Dr. Tedros Adhanom Ghebreyesus told the conference that universal health coverage could not be achieved with an adequate health force. "But there is a danger because of the huge gap" in needed workers. This can only be solved with cooperation among many parties.

"At the WHO, we developed the SDG action plan and 12 UN agencies have come together on it," he said.

"All roads lead to universal health coverage," Adhanom Ghebreyesus said. "Half of the world's population does not have access to essential health services. A hundred million people annually go into poverty because of out-of-pocket. This is a tragedy. And this has to be addressed. We have to honor the pledge of reaching universal health care by 2030.'

He said the most central element of reaching that goal is increasing the workforce. "We have to train more and also we have to retain them," he said.

Norway's minister of health, Bent Hoie, said that "training health workers is the key to achieving this goal the Sustainable Development goal of universal health care. "But the statistics are alarming," Hoie said.

"There will be a deficit of 18 million health workers in the world in 2030." He said: "We need to work better in health prevention and health promotion, we need to use more technology and to find new models to deliver health services." "It is no option to leave people without the care they need because the doctors, nurses, and midwives are not there," Hoie said. "We cannot deprive people of healthy lives for the simple reason that we do not invest enough in health workers."

Hoie said that only 4% of global health care workers are in Sub-Saharan Africa. "They care for 24%of the global disease burden," he said. "This is an unacceptable situation." "We have to invest more in health workers," the health minister said. "Spending on education and health workers is not a cost, it is an investment, with high returns."

Investing in health workers can power economic growth and improved global security, he said, as well as improving the lives of women, who make up the majority of health workers.

Hoie said that the primary responsibility for training health works rests with governments, he said there must be an international response.

He said that with the Qatari Silatech, Norway supported the creation of a global trust to help meet the goal of financing training for the millions of new health workers needed.

Peter Salama, the executive director of universal health coverage at the WHO, told the conference that the WHO was working on creating partnerships with financial institutions to drum up the investment needed.

He called health workers a "new generation of knowledge workers in the making." Salama said that the main reason why some countries are slow to pick up on the spread of an epidemic, such as Ebola, was because of the lack of primary health care workers. "This is one of the best examples of why we need to invest in the health force at rural, decentralized levels," he said. In Africa, thousands of volunteers burying victims of Ebola helped to its spread.

Salama said that 40 million new jobs in health care expected to be created by 2030, that still left nearly 20 million needed, and the vast majority of them in the poorest countries.