Qatar Airways Unveils The Super Jumbo Airbus A380 at HIA 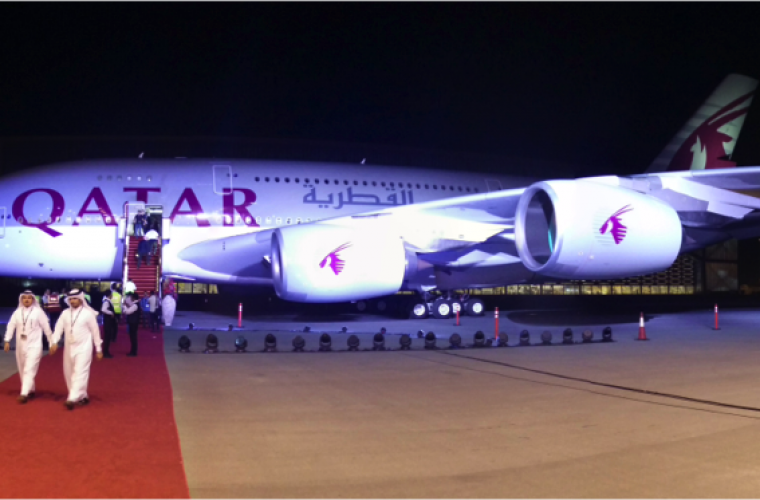 Registered A7-APA, after its take off form Hamburg upon delivery by Airbus to the airline, the aircraft arrived at HIA after a short flypast over the Doha Corniche showcasing its beautiful livery in Qatar Airways colours with “Qatar” written in bold on the under belly of the aircraft. Residents of Doha were surprised to an aircraft flying so low and shared the excitement on social media.

During the press conference after the arrival of the aircraft Mr. Akbar Al Baker addressed the local and international media, “arrival of the new super-jumbo marks a moment of great pride for the State of Qatar and the national airline”

Speaking to journalists Al Baker said “We received the aircraft two years later than proposed delivery date as we wanted Airbus to modify the wing design which was causing the hairline cracks, as we at Qatar Airways give the passenger safety the utmost priority” 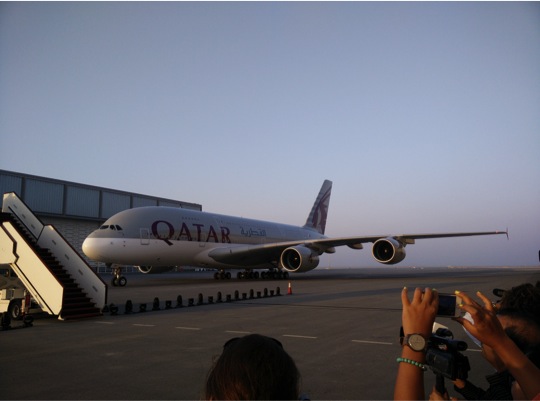 Qatar Airways currently have 13 A380’s on order (10 firm, 3 optional). The aircraft is configured in three classes which seats a total of 517 passengers, 8 seats in First Class, 48 in Business Class and 461 in Economy Class spread across two decks.

First Class: The First Class aboard the A380 has 8 suites on the upper deck in a 1-2-1 configuration. Featuring a 90” full flat bed (longest in the industry) and a 26” HD in-flight entertainment screen which can be accessed through a touch control pad in the armrest. All seats have direct aisle access and exclusive spa-like bathrooms with luxurious amenities.

Business Class: 48 seats featured in Business Class on the upper deck in a 1-2- 1 configuration with a 80” full flat bed (effective pitch: 51”) and 17” HD in-flight entertainment screen. All seats have direct aisle access.

Both the First and Business Class passengers aboard the A380 will have access to the spacious inflight lounge offering premium passengers an escape from the typical airplane environment which is located on the upper deck behind the Business Class cabin.

Economy Class: Spread across two decks the Economy Class seats 461 passengers. 56 seats are located on the upper deck in 2-4-2 configuration and 405 seats on the main deck in 3-4-3 configuration. All the Economy seats have 32” pitch and 10.6” IFE (in-flight entertainment) screens.

The IFE system has a lot to offer with great collection of entertainment, news and audio. The IFE will also display a live view of outside the aircraft from a tail camera, the first on Qatar Airways.

All passengers on the A380 can experience the in-flight Wi-Fi connectivity allowing them to send emails for work, browse the web, or stay up-to-date with their social network. The cost and availability of the service to the passengers was not declared by the airline.

The Airline will judge the performance of the current fleet after its inaugural flight before placing any more orders for this type of aircraft. The rivals in the industry Emirates currently fly 50 A380’s in their fleet, which has a list price of $380 million.

Qatar Airways will have received a total of 4 Airbus A380’s by end of 2014 and will operate a daily flight on London and Paris routes which are the most popular on the airline’s network. The first commercial flight will be QR001 to London Heathrow on October 10th 2014.