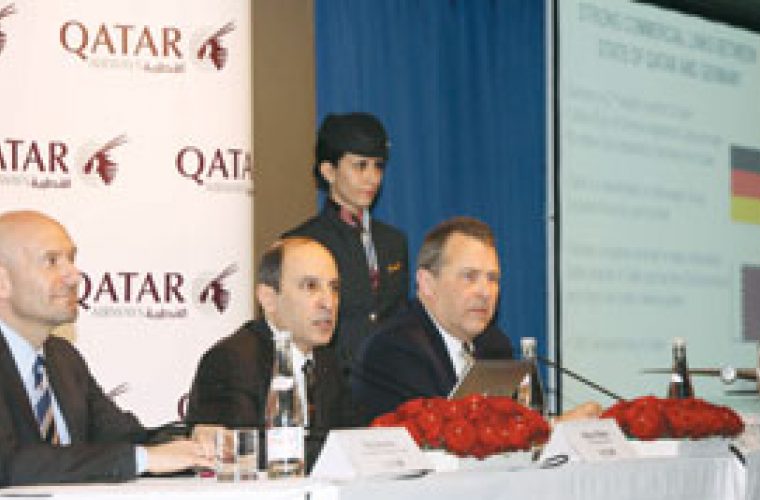 Qatar Airways vice-president (Europe) Paul Johannes, chief executive officer Akbar al-Baker and country manager (Germany) Greg Epps announce further route expansion at the press conference in Berlin yesterday Qatar Airways yesterday announced further flight increases with new routes to Kolkata, Oslo and Sofia, to be launched in the second half of the year, and capacity enhancement in Europe, Africa, Asia Pacific and North America. Qatar Airways CEO Akbar al-Baker unveiled the latest expansion details at the opening day of the international travel show ITB Berlin. He said daily flights to the Indian city of Kolkata will be launched on July 27, taking Qatar Airways’ capacity in India to 95 services a week spread across 12 cities. In Europe, where much of Qatar Airways’ recent expansion has been the focus, the airline is to launch four-flights-a-week to the Bulgarian capital, Sofia, from September 14. Beginning October 5, the airline will build on its successful operations in Scandinavia with the start of five-flights-a-week to Norway’s capital city of Oslo. The airline already operates scheduled services to the Swedish capital Stockholm and Denmark’s capital city of Copenhagen. Together with a raft of capacity increases that see the Singapore, Kuala Lumpur, Manchester and Dar-es-Salaam routes go double daily, Geneva, Seychelles and Copenhagen will be upgraded to daily operations, al-Baker said. Earlier this week the airline embarked on the latest phase of its 2011 expansion drive, launching three-flights-a-week to Stuttgart; its fourth German gateway and 99th international destination. With frequency on the Munich route increasing from daily to 11 flights a week, effective yesterday and the Frankfurt route upgraded from 10 to 13 flights each week, beginning March 27, Qatar Airways faces its biggest-ever capacity rise in Germany in a short timeframe; from 24 to 34 flights a week, the official said. The Doha–Berlin route remains a daily operation. “Yet again, we are demonstrating our strategic focus to serve key business and leisure cities around the world, as well as underserved markets with new direct flights and increased capacity,” Al-Baker said. “As we take delivery of more aircraft, we will quickly induct them into service and constantly look at new opportunities to give the travelling public more travel options, more choice and more flexibility,” he added. Since January 2010, Qatar Airways has taken delivery of 22 new planes. By 2013, Qatar Airways plans to serve more than 120 key business and leisure destinations worldwide with a modern fleet of over 120 aircraft. Currently, the airline’s fleet stands at 94 aircraft.