Qatar Airways Places its Mark on its 20th Anniversary Year 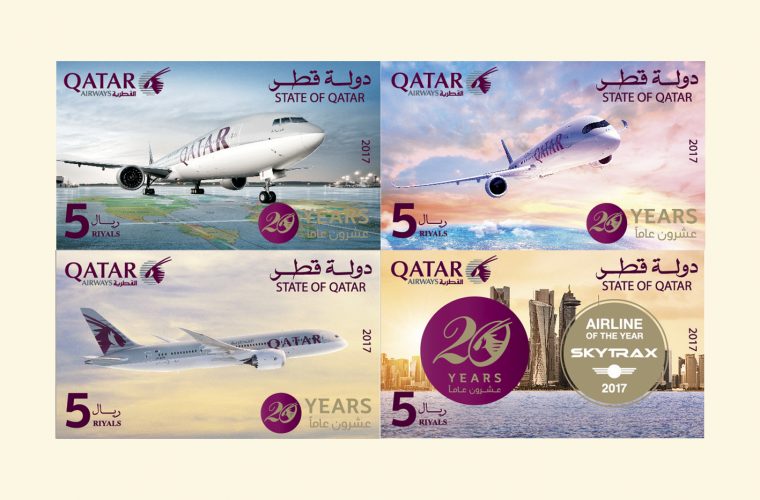 Qatar Airways continues its ongoing celebrations of its 20th anniversary with four unique commemorative postage stamps issued in partnership with the Qatar Postal Service Company (Qatar Post). The stamps, which are set to be on sale locally from 30 November 2017, serve as a historic milestone of Qatar Airways’ world-class achievements throughout the last two decades.

Qatar Airways’ new limited-edition stamp collection consists of four unique designs following a timeline of some of the airline’s many accomplishments. The first is in honour of Qatar Airways achieving a 50-strong fleet of aircraft in 2006, with the second stamp celebrating the airline adding its 100th destination to its global route map in 2011.

The third design highlights Qatar Airways becoming the Global Launch Customer of the world’s very first Airbus A350-900 in 2015, while the fourth stamp pays tribute to two of the airline’s latest successes in 2017: reaching its 20th year anniversary and being awarded ‘Airline of the Year’, for the fourth time, by Skytrax.

Qatar Airways Group Chief Executive, His Excellency Mr. Akbar Al Baker, said: “Qatar Airways is proud to commemorate its 20th anniversary by sharing these symbolic stamps with the people of Qatar. The stamps celebrate Qatar Airways exceptional expansion as the fastest-growing airline in the world.

“Through these mementos, we express our pride in being Qatar’s national carrier and in having reached so many major milestones within the airline’s short presence in the industry. We cannot think of a more memorable way to present our numerous achievements than through these historic stamps issued by Qatar Post, and we hope they travel as far and as wide as our airline’s extensive global network.”

Qatar Post Chairman and Managing Director, Mr. Faleh Al-Naemi, said: “Our collaboration with Qatar Airways on this unique imprint is a combined celebration for the State of Qatar and its five-star airline. Qatar Post is pleased to participate in the production of the 20th anniversary stamps for Qatar Airways, which will be one of the monumental records in our nation's history.”

Qatar Post produced a total of 160,000 stamps which will be sold for QR5 each to the general public. Qatar Post is the national provider of postal services in Qatar, since it was established in 1950. The company operates 29 branches across the country, handling all domestic and international operations, including e-Government postal services.

These four stamps highlight only a handful of Qatar Airways’ numerous accomplishments achieved throughout the last 20 years. The award-winning airline has received scores of accolades, this year including ‘Airline of the Year’, by the prestigious 2017 Skytrax World Airline Awards, for a fourth winning time.

In addition to being voted ‘World’s Best Airline’ by travellers from around the world, Qatar’s national carrier also marked its 20th anniversary by winning a raft of other major awards at this year’s ceremony, including ‘Best Airline in the Middle East,’ ‘World’s Best Business Class’ and ‘World’s Best First Class Airline Lounge.’

Qatar Airways operates a modern fleet of more than 200 aircraft to a network of more than 150 key business and leisure destinations across Europe, the Middle East, Africa, Asia Pacific, North America and South America. The airline is launching a host of exciting new destinations planned for the remainder of this year and 2018, including Canberra, Australia; Chiang Mai, Thailand and Cardiff, U.K, to name just a few.