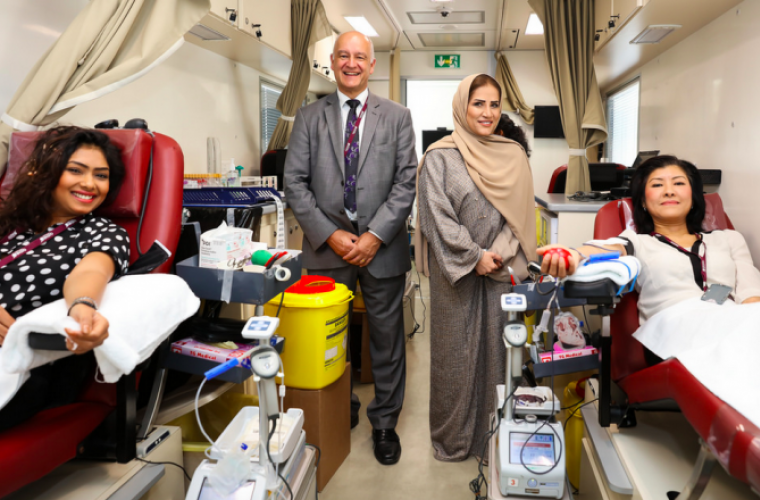 As part of its commitment to support the local community and its responsibility as a global corporate citizen, Qatar Airways hosted a blood donation campaign at its headquarters for its employees and their families.

The blood drive, a collaboration between the award-winning airline and Hamad Medical Corporation (HMC), was hosted on 28 September at Qatar Airways’ headquarters in Doha to help increase the blood supply in the State of Qatar.

Qatar Airways Group Chief Executive, His Excellency Mr. Akbar Al Baker, said: “As the national carrier of the State of Qatar, it is our responsibility to support our local community and those in need. By hosting this initiative, we hope to raise awareness and educate our staff on the numerous benefits of donating blood. We are proud to host such an event at our corporate headquarters, which highlights the many ways we can all make an important contribution to our local community via this worthy cause.”

Blood donation offers many benefits to both the donor and the donee. While the donee receives the specific blood type they need to recover from illness or injury, the donor also benefits from the process, as donating blood is believed to help in lowering the risk of cardiovascular diseases as well as certain forms of cancer.

The national carrier of the State of Qatar is one of the fastest-growing airlines operating one of the youngest fleets in the world. Now in its twentieth year of operation, Qatar Airways has a modern fleet of 200 aircraft flying to business and leisure destinations across six continents.

Qatar Airways will be adding flights to many more exciting destinations to its network in 2017 and 2018, including Canberra, Australia; Chiang Mai, Thailand and Chittagong, Bangladesh, to name a few.

The award-winning airline received a number of accolades this year, including Airline of the Year by the prestigious 2017 Skytrax World Airline Awards, which was held at the Paris Air Show. This is the fourth time that Qatar Airways has been given this global recognition. Qatar’s national carrier also won a raft of other major awards at the ceremony, including Best Airline in the Middle East, World’s Best Business Class and World’s Best First Class Airline Lounge.