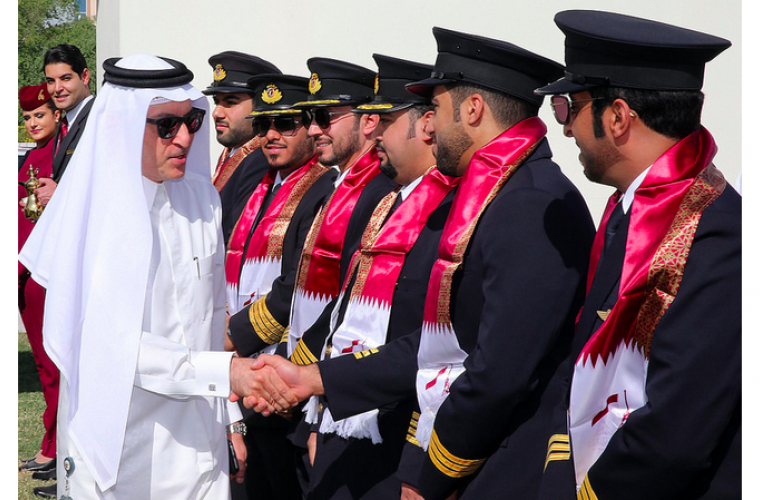 Qatar Airways’ official celebration of the country’s forthcoming National Day kicked off on Tuesday with an event for the airline’s employees and guests from local media and social media influencers highlighting Qatar’s rich culture and heritage.

The event features a range of activities celebrating local culture, including henna painting, falcon handlers, traditional Qatari Ardha as well as handicrafts and booths offering traditional local foods. The event is open to all Qatar Airways Group employees and their families and also marks the year-end celebrations of the airline’s 20th anniversary.

H.E. Mr. Akbar Al Baker said: “I am honoured to be here alongside members of our local community in celebration of our country’s National Day. A core value of Qatar Airways is expressing pride in Qatar, and this year especially, we celebrate our patriotism, solidarity and unity as a nation.

“This year is a particularly important one for us as an airline, as we celebrate our 20th anniversary of global operations. As our country’s national carrier, we are passionate about bringing people from around the globe to Qatar, so that they can discover for themselves the generous hospitality and unique heritage of our country. We look forward to many more years of successfully bringing the world to Qatar.”

The two-day event taking place this week on Tuesday and Wednesday, held at Airport Park adjacent to the airline’s Head Office, featured with a special performance by famous Qatari singer Fahad Al Kubaisi, as well as a poetry reading by Qatar Airways pilot Senior First Officer Hadi Al Qahtani, who composed a special poem in honor of the occasion.

Qatar Airways passengers on all flights departing Doha on National Day will be offered a specially-designed box containing a selection of delicious dates, so they can join in the country’s annual celebrations. Each passenger will also be provided with a specially-produced set of postcards showcasing images of Doha taken by local photographers to mark the special occasion.

2017 has been a tremendously successful year for Qatar Airways, as the airline has won more than 50 awards across multiple categories since January, including being named ‘Airline of the Year,’ by international air transport rating organization Skytrax. Qatar Airways was named ‘World’s Best Business Class,’ ‘Best Airline in the Middle East,’ and ‘World’s Best First Class Airline Lounge’ at the Skytrax awards ceremony held in Paris in June.

Qatar Airways proudly flies the flag of the State of Qatar to more than 150 destinations worldwide, bringing people to Doha from every corner of the globe via the award-winning, state-of-the-art Hamad International Airport (HIA).

The national carrier of the State of Qatar is one of the fastest-growing airlines operating one of the youngest fleets in the world. Now in its 20th year of operations, Qatar Airways has a modern fleet of more than 200 aircraft flying to business and leisure destinations across six continents.

Qatar Airways will be adding flights to many more exciting destinations to its network throughout the remainder of this year and 2018, including St. Petersburg, Russia; Canberra, Australia; and Cardiff, UK, to name just a few.