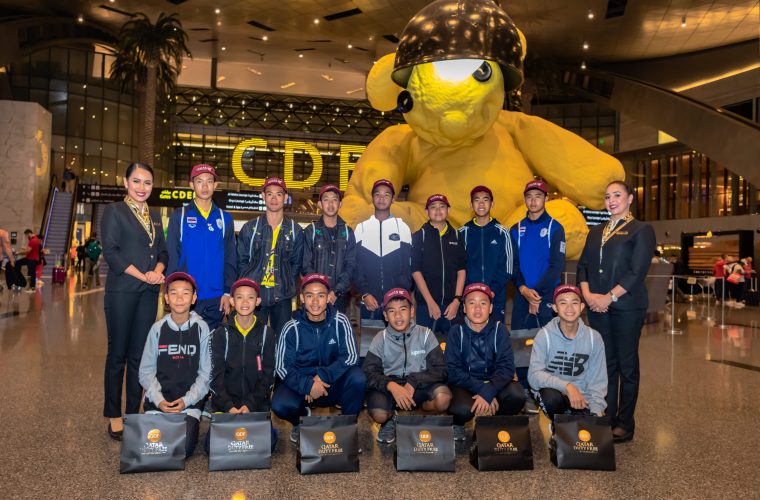 In recognition of a truly inspirational story of strength and survival, Qatar Airways proudly flew the Wild Boars football team, consisting of the 12 Thai children and their coach who were trapped inside a cave in Thailand for more than two weeks, from Thailand to London to take part in the ‘Pride of Britain’ 2018 awards ceremony. The group was accompanied by the two selfless British divers who were at the heart of their cave rescue.

During their stopover at Hamad International Airport (HIA) in Doha, the football team were met by Qatar Airways and Qatar Duty Free (QDF) officials, who presented the boys with gift bags from QDF consisting of signed football jerseys and baseball caps. The group also had the chance to experience the five-star hospitality of Qatar Airways’ home and hub, HIA, the award-winning airline’s gateway to the world.

Qatar Airways Group Chief Executive, His Excellency Mr. Akbar Al Baker, said: “Qatar Airways is very proud to support the Wild Boars football team on their trip from Thailand to the U.K. Their story is one of courage, strength and determination; they are inspirational children and we were delighted to be able to fly them to London for the awards ceremony.

“We also look forward to welcoming them on board once again for their return trip home to Thailand, and are thrilled to be a part of the incredible journey these young people have taken over the course of the last few months.”

The 12 children and their coach entered the sprawling Tham Luang cave network in Northern Thailand on 23 June. Within hours, the cave flooded and the boys were trapped inside without food or water. The world watched as a team of international diving experts led the mission to rescue them, evacuating the boys one by one. The last of the group, the coach, successfully exited the cave on 10 July, more than two weeks after they had entered.

As part of its continued expansion plans, Qatar Airways plans to launch an array of exciting new destinations over the coming months, including Mombasa, Kenya; Gothenburg, Sweden and Da Nang, Vietnam.