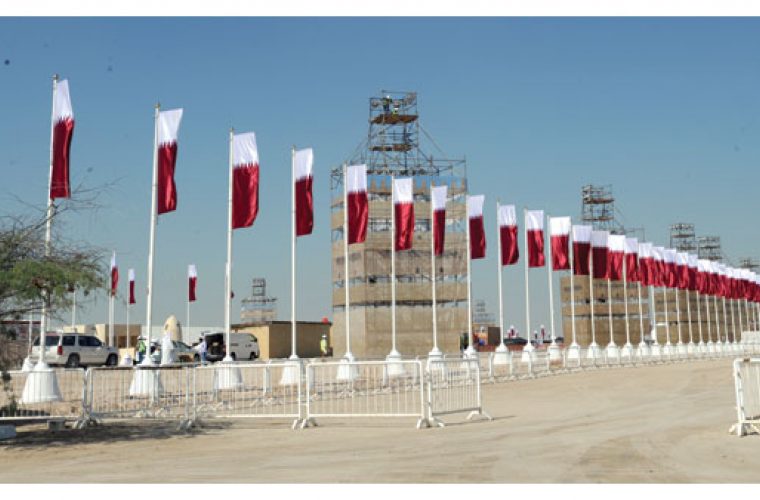 The Qatar Tourism Authority (QTA) is finalising a host of activities, scheduled from December 15 to 19, in collaboration with the National Day Organising Committee. At Darb al-Saai near the Sports Roundabout in Doha, several pavilions have already been erected. During a site visit yesterday, the sound system was being tested out and the flood lights were being put in place. According to the Arabic daily Arrayah, a number of events are scheduled to take place at Darb al-Saai, including a falcon show, camel rides, a vintage cars display and cultural programmes. The events will begin at December 10 and are expected to carry on until December 18. Flags have been put up on the Corniche. Buildings across Qatar are expected to hoist the national flag and some draped in the national colours, in preparation for the National Day. The main military parade will be held on the Corniche. According to Arrayah, the dress rehearsals for the parade are expected to begin on December 15. Spectator stands are already in place. As the day approaches, people are giving finishing touches to their celebration tents pitched in various spots. The tents will host a myriad of activities. Most shopping malls and retailers around the country have started displaying National Day-related items such as hats, T-shirts, scarves, Qatari flags, stickers and other festive items. Car accessories shops offer flags and stickers. September 3 was celebrated as a national holiday until 2007 when the Emiri Diwan decreed that December 18 would be marked annually instead. All visitors to Qatar at the Abu Samra border post and at Doha International Airport will receive a traditional Qatari welcome as part of the QTA activities. “The National Day is an opportunity for us to recognise and celebrate the actions of Qatar’s forefathers who strived to create a unified nation with the Qatari tribes,” said QTA chairman Issa bin Mohamed al-Mohannadi. QTA is conducting a National Day competition for the best-decorated hotel front. The competition will put the spotlight on Qatar’s iconic building designs and contemporary architecture. http://www.gulf-times.com/qatar/178/details/373663/preparations-gathering-pace-for-national-day