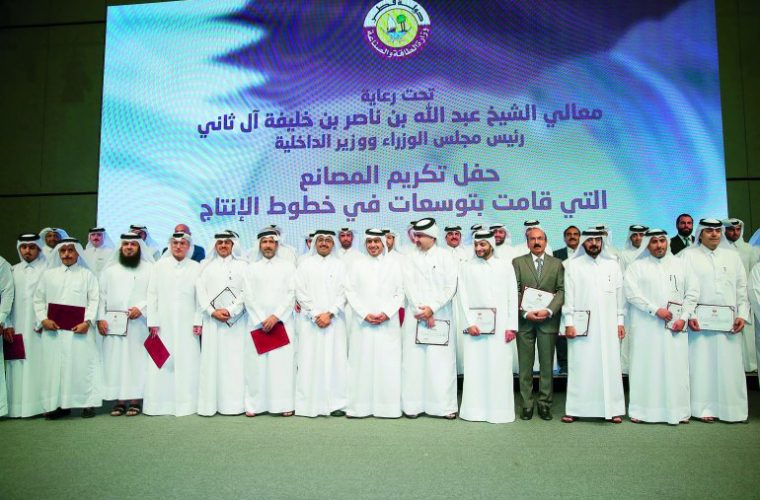 In a ceremony, held at the Doha Sheraton Hotel, the Prime Minister inaugurated Qatar industrial portal, an interactive portal of strategic importance in industrial planning that aims at enabling decision-makers and investors to make appropriate decisions for their different projects.

The Minister of Energy and Industry H E Dr Mohammed bin Saleh Al Sada said that Qatar recorded a sharp jump of about 80 percent in the number of new industrial plants which had started production after siege, compared to previous year.

“We have 98 new plants that came into actual production compared to 56 plants in the year before the unjustified blockade, registering a growth of approximately 80 percent on year-on- year basis,” Minister Al Sada told The Peninsula yesterday on the sidelines of an event, held to recognise the contributions of business leaders and owners of factories who ramped up their scale of production to achieve self-sufficiency. The event was held in the patronage and presence of the Prime Minister and Interior Minister at Sheraton Doha.

The Minister added: “This significant achievement reminds me the famous statement of the Amir H H (Sheikh Tamim bin Hamad Al Thani) who once said that this (blockade) came as a blessing in disguise in our journey of economic diversification and self-sufficiency that we started years ago. The industrial sector is developing in an accelerated manner.”

Dr Al Sada noted that the other facet of the development, in addition to the 80 percent, is that a lot of existing plants increased their scale of production in manyfold. Some production facilities increased their scale by up to 400 times. With this sharp rise in the number of new plants, the total number of factories in the country has reached 812.

Asked about government’s support in providing market access to the companies, especially to those which have surplus output, Minister of Energy and Industry H E Dr Mohammed bin Saleh Al Sada highlighted that Qatar now have one of the biggest and most modern Hamad Port which is providing easy access to all over the world.

“In a very short period of time Hamad Port took a substantial portion of the trade in the region. A few months ago it was reported that the port has acquired nearly 27 percent of the regional trade volume, and by now, I am sure it must have grown much more,” added the Minister.

“In addition, we have the world-class Qatar Airways, including its air cargo services, which reaches to over 220 destinations. All this is providing seamless market access to Qatari companies and manufacturers all over the world.”

Meanwhile, the Minister also announced the launch of the expansion of the Small and Medium Enterprises economic zone to about 825,000 metres squared, including infrastructure and basic services needed for industrial projects. The announcement was made during a ceremony held to recognise a number of owners of Qatari factories and companies who have increased the products of their companies or added new products.

Dr Al Sada, in his speech at the ceremony, said that it is scheduled to complete the expansion of the basic facilities during the first quarter of next year, bringing the total area to more than 11 million square metres, to contribute with the economic zones and free zones in support of industrial development in the country.

The Minister said that since the beginning of the unjust and illegal blockade imposed by neighboring countries on Qatar, the directives issued by H H the Amir for the industrial sector were clear and decisive, which were to support the Qatari industry, especially SMEs, further developing the new industrial zone, building ready-made industrial facilities for the private sector, providing them with the latest services and basic facilities, facilitating procedures, self-sufficiency and economic openness.

Dr Al Sada also announced the launch of the industrial database, an interactive electronic platform that will have strategic importance in the field of industrial planning. The platform will enable policy makers and investors alike to make the appropriate decisions regarding their projects.

Al Sada praised factory owners who increased their production and added new lines since the beginning of the unjust blockade, saying their efforts helped meet the demands of the local market as Qatar continues to strive for self-sufficiency.

He said that today’s (yesterday’s) ceremony was an initiative by the Prime Minister and Interior Minister H E Sheikh Abdullah bin Nasser bin Khalifa Al Thani to recognise these owners, not just for their increased activity, but for promoting the ‘Made in Qatar’ slogan.

The Minister of Energy and Industry said that the event reflected an appreciation to all businessmen and investors in the State of Qatar, stressing that providing incentives and support to that vital group will continue.

The Minister said that the goal of the Ministry of Energy and Industry is to increase the contribution of the private sector as a percentage of the GDP. He addressed business owners and said that their expansion will lead to the prosperity of the Qatari economy.

He added that it is likely that there were more factories that had expanded their production recently, in addition to the 45 recognised today. He called on factories’ managements to provide the Ministry with accurate and up-to-date data, so that it can be aware of the latest developments.