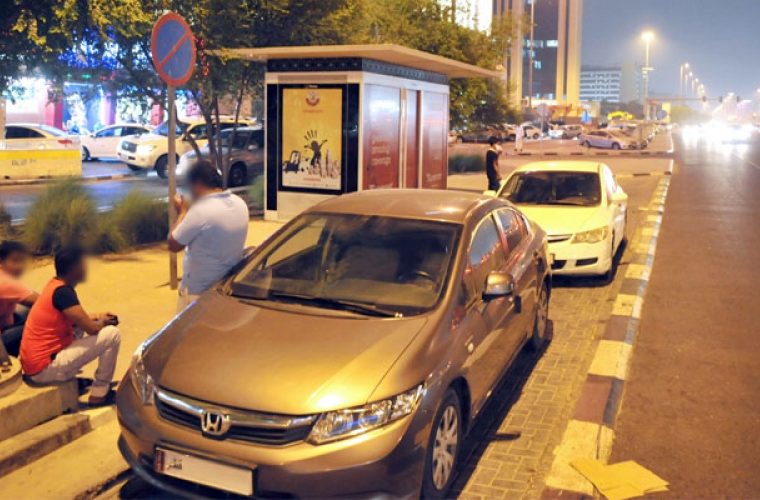 Public transport users have resented the practice of parking cars in front of bus stops, which they say is common across the city.
This causes a lot of inconvenience for waiting passengers as well as bus drivers, they point out, requesting the authorities concerned to take the necessary steps to end this “menace”.
Vehicles of different sizes and types – from private cars and illegal taxis to mini-vans and small trucks used to deliver various kinds of goods – could be seen parked in front of bus stops, including those located along dedicated bays, completely ignoring the “no parking” signs along that stretch.
The problem, say commuters, is particularly common in areas that house a number of shops and/or offices.
While some people stop their vehicles in front of bus stops for a few minutes and leave after buying something from a shop in the vicinity, others park their cars in such places for hours, it is found.
For instance, at a bus stop near the Toyota signal along Airport Road, cars apparently belonging to visitors to buildings in the vicinity are sometimes seen parked for several hours.
Trucks used by companies supplying foodstuff and other goods are also seen parked in front of bus stops adjoining supermarkets, sometimes for more than just a few minutes.
Bus stops are also places where the drivers of illegal taxis - as well as some unauthorised ones - look for passengers. For example, illegal taxis are known to occupy spaces in front of bus stops along the busy Airport Road as their drivers wait for passengers.
With other vehicles occupying their designated space, drivers of public transport buses have to stop their vehicles “rather awkwardly”, often occupying a reasonable amount of road space. This, in turn, stalls traffic on that stretch for a while and also causes inconvenience to passengers who have to find a way past vehicles occupying the space in front of bus stops after alighting from or while boarding a bus.
“It is a common practice in Doha. While some people, particularly drivers of delivery goods vehicles, are sometimes compelled to stop in front of bus stops due to the lack of parking space in the vicinity or in front of a shop, others do so out of sheer ignorance of rules and road etiquette or simply don’t care,” said a bus user.
“What is really annoying is that motorists park their vehicles even in dedicated bays for bus stops, sometimes for hours. This happens because the motorist is callous, ignorant or plain arrogant, who doesn’t care much for bus users. Strict action is needed against such condemnable road behaviour,” said another commuter.
While many bus passengers agree that parking problems in some areas is to a certain extent responsible for such practices, they feel it still cannot be used as an excuse to block a space specifically meant for something else. “If you don’t have parking space in front of your house, will you go and park in front of someone else’s gate or block the entrance to an office complex? I know some people do that, but it’s inappropriate behaviour, to say the least,” a resident argued.
Calling for better monitoring by the authorities, a resident told Gulf Times that when he asked a driver to remove his car parked at a bus stop in Doha, the latter ignored his request.
“When I saw the car at the same bus stop again a few days later, I found out that the driver was an illegal taxi operator who was soliciting customers,” he said.