Over 50% of young Arabs say this generation is more entrepreneurial than the one before, Arab Youth Survey finding reveals 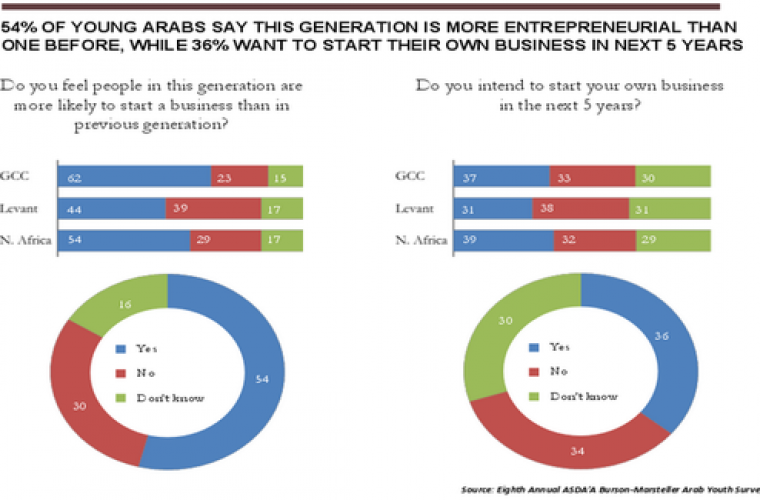 Young Arabs are increasingly positive about entrepreneurship with more than half believing members of this generation are more likely to start a business than the previous one.

In a separate response, the survey found that 36 per cent of young Arabs said they themselves intend to start their own business in the next five years – 37 percent of youth in the GCC, 39 percent in North Africa and 31 per cent in the Levant.

Real estate, technology and retail were the top three sectors in which Arab youth would like to start a new business venture. Real estate is the preferred choice for a start-up in the Gulf states, where 24 per cent of youth said they would opt to launch a property-related company, whereas technology was the top choice for would-be entrepreneurs in the Levant (15 per cent) and North Africa (18 per cent). Retail is the second most popular choice in Levant and North Africa for 15 per cent and 16 per cent of respondents respectively; however in the Gulf only 9 per cent would opt to start a retail operation.

Across the whole Middle East 34 per cent said they did not intend to launch their own business, while 30 per cent didn’t know. Lack of financial resources to start a business was cited as the main reason overall, by 20 per cent of young people, however in the GCC only 8 percent believed they lacked the means to go it alone, while in North Africa, 37 percent saw this as the biggest hurdle.

Young Arabs believe governments can do more to support young entrepreneurs, with 39 per cent saying that encouraging affordable lending should be made a priority; 25 per cent calling for education and training to be improved and made more available; and 19 per cent asking for government regulations and red tape to be cut.

“These findings suggest governments in the Middle East have an excellent opportunity to really help kick-start an entrepreneurial culture in the region,” said Sunil John. “With the Arab world needing to provide 80 to 100 million jobs by 2020, according to the World Bank, this represents a rich resource of largely untapped talent who can help drive the Arab world’s transformation to knowledge-based economies, and provide the opportunities of the future.”

Now in its eighth year, the ASDA’A Burson-Marsteller Arab Youth Survey has established itself as a key referral source for businesses and policymakers across the world.

In-depth results from the 8th Annual ASDA’A Burson-Marsteller Arab Youth Survey, including survey highlights and a white paper in Arabic and English, are available on www.arabyouthsurvey.com