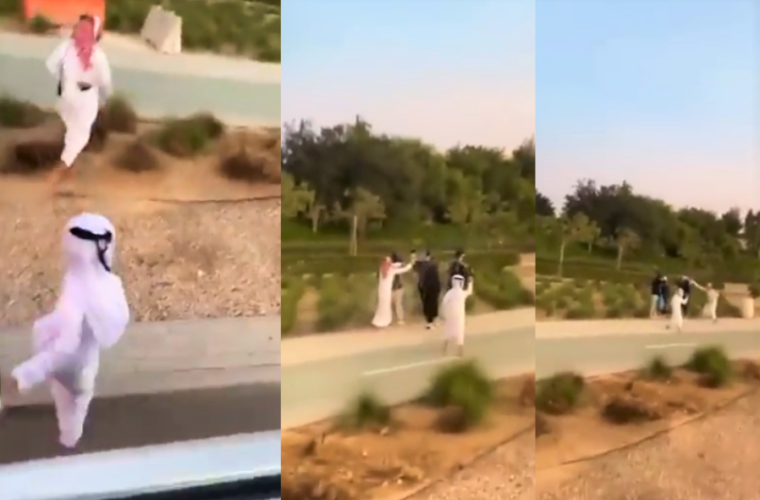 In a Tweet, the Ministry of Interior announced that the young men who were involved in the spraying of a family have been apprehended, saying:

Referring to the video clip circulating on social media, which shows a number of young people spraying a family while they were walking on the side of the road, the competent authorities at the Ministry of Interior were able to apprehend the accused in the aforementioned incident, whose ages ranged between 12 and 15 years (we reserve the right to mention their names due to their age), and they are being referred to the competent authority to complete its procedures in such cases.

The Ministry of Interior-Qatar would like to assure the honorable public that its relevant agencies will not hesitate to take the necessary measures for everything that would maintain order and societal security, especially everything related to cases of assault, disturbance, or harassment, including publishing the names and pictures of aggressors in the future to prevent the recurrence of such acts.

A viral video on Twitter showing two young boys spraying a family walking in a public place with snow spray has led to social media outrage.

The clip showed the two boys got out of a car with snow sprays and attacked the three family members. Another boy on top of their vehicle filmed the incident.

Some commented that rules must be enforced to stop such foul behaviour, urging authorities to take necessary action and raise awareness to put a stop to such.

The Peninsula quoted Qatari journalist Saleh Gharib's tweet saying, “Unfortunately, we have seen many cases in which values were neglected to celebrate the National Day. There must be severe punishment, or it will become a habit.” Meanwhile, another person commented that her car was also foam-sprayed which blocked her view and caused her to panic.

Lawyer Khaled Abdullah Al-Mohannadi said in a tweet: “Anyone who violates the sanctity of private life shall be punished by law. It is necessary to study this phenomenon and develop solutions to it. And awareness before the 2022 World Cup, that these individual actions are not accepted by society in Qatar.”