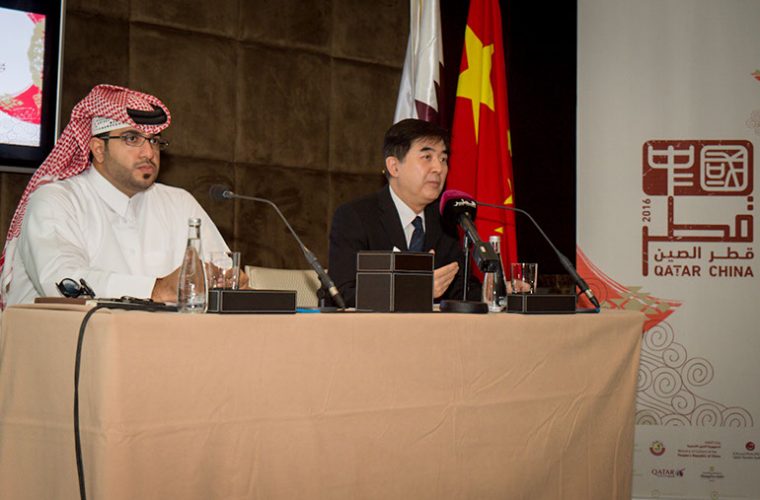 · His Excellency Mr. Li Chen, Ambassador of the People’s Republic of China to the State of Qatar, assembled ladies and gentlemen of the press, welcome to the official launch of the Qatar China bilateral Year of Culture;

· The Qatar Years of Culture, under the visionary guidance of the Chairperson of Qatar Museums, Her Excellency Sheikha Al Mayassa bint Hamad bin Khalifa Al Thani, are intended to use art and culture to foster improved mutual understanding, and build bridges between cultures;

· The Years of Culture are now in their fifth edition, following previous successful partnerships with Qatar/Japan (2012); Qatar/UK (2013); Qatar/Brazil (2014) and most recently Qatar/Turkey last year;

· Under the wise and visionary leadership of His Highness the Emir Sheikh Tamim bin Hamad Al-Thani, Qatar has a clearly defined vision – the Qatar National Vision 2030 – to move towards a knowledge based economy, beyond oil and gas. Closely aligned to the four pillars of this National Vision – specifically those that focus on human development, establishing Qatar on the world map and supporting intercultural dialogue – is the role of arts and creativity.

· While Qatar and China are very different places with very different cultures, we share in common the fact that we are civilisations striving to balance progress and heritage in the context of the modern world;

· We have common shared values based on respect for family, education, hospitality and cultural curiosity. In addition, there are strong economic ties between our two countries, and positive diplomatic relations that date back to the 1980s;

· We are looking forward to an exciting programme of activity that should hold something for everyone:

In Qatar, in March alone we will have…

· The official opening ceremony for the Qatar China 2016 Year of Culture, with special entertainment and performances at the Katara Drama Theatre in partnership with the Chinese Ministry of Culture on 24th January

· The ‘What About the Art?’ exhibition, a showcase of contemporary Chinese artists, curated by internationally acclaimed New York-based Chinese artist Cai Guo Qiang (who exhibited a solo show in Qatar at the Mathaf Arab Museum of Modern Art in 2011), which will be on show at the QM Gallery Al Riwaq;

· The ‘Silks from the Silk Road- Chinese Silk Art’ exhibition in the QM Gallery at Katara;

.. and a programme of several other events to be announced throughout the year.

A programme of events in the second half of the year, which will be announced in due course, including:

· A reprise of the successful photography exchange programme

· I would like to take the opportunity to thank our stakeholders and partners in making the Years of Culture a reality – including the Ministry of Culture Arts and Heritage Qatar, the Ministry of Culture at the People’s Republic of China, the Chinese Embassy in Doha, Katara, QTA, Qatar Football Association, Qatar Airways, our official airline sponsor and our hospitality sponsor Shangri La Hotel group, for their continued support;

· It is our firm belief that the Year will help show Qatar is open to the world, demonstrating our appeal as a cultural destination; promote China in Qatar; and promote improved intercultural dialogue and mutual understanding between the two historic cultures of China, and Qatar.

· I am sure we can rely on the media for your support in following the events of the Year of Culture closely.