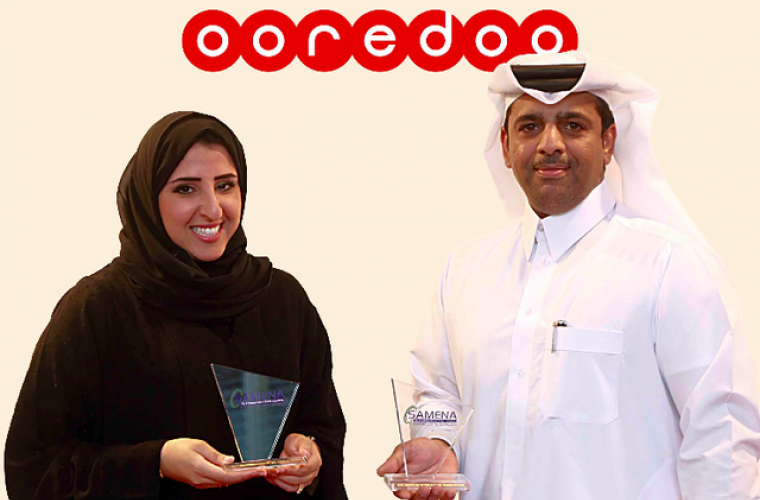 “Best Telecom Leader” and “Best Innovative Service” Received at Annual SAMENA Council 2013 Awards
Ooredoo has received two more major global awards, as the company continues to enjoy its most successful year of honours ever. At the “Convergence to Oman 2013” conference this month, the SAMENA Council presented two key accolades to the company. The Ooredoo Chairman, His Excellency Sheikh Abdullah Bin Mohammed Bin Saud Al Thani, received the prestigious “Best Telecom Leader” award for his role in driving the transformation of Ooredoo around the world, and for his important contribution to the global communication industry. Ooredoo also received the “Best Innovative Service” award for Ooredoo Mobile Money services, which now support more than one million customers in Qatar, Indonesia and Tunisia. The SAMENA Telecommunications Council is a tri-regional association that represents over 40 telecommunications operators in 25 markets and its awards highlight best practice across Southeast Asia, the Middle East and North Africa. Dr. Nasser Marafih, Group CEO, Ooredoo, said: “These awards are an important reflection of the range and diversity of services that Ooredoo provides to enrich the lives of people around the world. The international recognition of our Chairman, His Excellency Sheikh Abdullah, demonstrates the incredible role he has played in raising standards and transforming the communications industry, both nationally and around the world.” Sheikh Abdullah has continued to raise Ooredoo’s profile around the world in 2013. At the recent ITU Telecom World event in Thailand, Sheikh Abdullah challenged telecoms operators, regulators and partners to work together to support new broadband infrastructure projects and enhance access for all. At the UN Broadband Commission meeting this year, he emphasised that mobile operators should follow Ooredoo’s lead in using mobile technology to address key social issues and drive creativity. The award for Ooredoo Mobile Money is the latest in a number of prizes for the market-leading service. In Qatar, Ooredoo Qatar has partnered with QNB for Ooredoo Mobile Money, providing a vital facility for expatriate workers to send money home to their families. In Indonesia, Indosat has partnered with QNB Kesawan on the Dompetku service, enabling customers to use their mobile at more than 200 local organisations, including banks and retail chains, while in Tunisia, Tunisiana Ooredoo and Tunisian Mail (La Poste Tunisienne) have partnered on mobiflouss, which enables customers to top-up their airtime account, transfer money and pay bills via their mobile. Myanmar, where Ooredoo recently won a mobile network licence, will be a key area of focus for implementing mobile money solutions in the near future. Myanmar’s large, rural population of 60 million people has limited access to financial services, but will have widespread mobile phone access as Ooredoo rolls out its next generation network over the coming years. Ooredoo has seen a string of awards in 2013. Earlier this month, Ooredoo received the “Best Mobile Operator” award at the 15th Annual World Communication Awards, joining an international elite of companies that have received the prestigious honour. It also won “Best Marketing Campaign” and “Best CSR Initiative” at the CommsMEA Awards, and “Best Finance Team of the Year” at the Middle East’s Accountancy and Finance Excellence Awards in December. In November, Ooredoo won the “Best Middle Eastern Wholesale Carrier” award at the Global Carrier Awards held in Amsterdam. Ooredoo’s transformation programme – which saw the company launch its new global brand in a major ceremony during the GSMA Mobile World Congress in February this year – received the Gold Award for “Best Brand Experience Event” at the 2013 International Business Awards. Other regional and international awards for Ooredoo in 2013 include “Best Communications Company” at the Telecoms World Middle East Awards, “Best Customer Retention Programme” at the Insights Middle East Call Centre Awards and ‘Loyalty Programme of the Year – Middle East and Africa’ at the Loyalty Awards in London. - ILQ News -