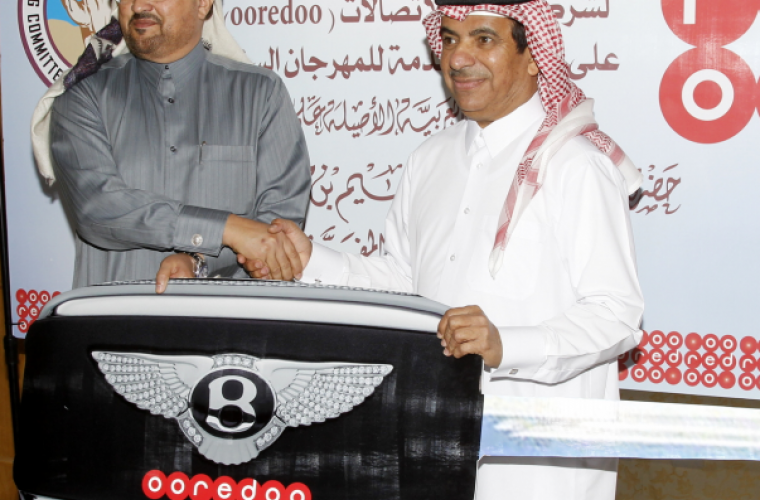 Ooredoo is sponsoring both the Hejen Racing Festival, held at the Al Shahaniya Camel Race Track from 18-29 January 2014, and the Bentley is the prize for the second match in the Al Heel category (relating to the age of the racing camel) in HH The Emir Silver Sword Race.

Waleed Al Sayed, COO, Ooredoo, said: “As a community-based company, returning as a main sponsor for the Hejen Racing Festival demonstrates our commitment to supporting Qatar’s rich cultural heritage and national sporting culture. We expect the Bentley star prize to motivate the racers, and add another thrilling element to one of Qatar’s most revered sporting events.”

In line with its Corporate Social Responsibility strategy, Ooredoo supports a wide range of activities for both Qatar’s national heritage and sporting culture.

As well as the Helen Racing Festival, Ooredoo recently announced it will sponsor Qatari sporting hero Nasser Al Attiyah for all his public endeavours in 2014, as well the Qatar ExxonMobile Open 2014 Tennis Tournament, Ooredoo Marathon and the recent Paris Saint-Germain vs. Real Madrid friendly.

The Hejen Racing Festival will feature more than 6,000 camels from Qatar and the Arabian Gulf participating in races that range in distance from 4 km to 8 km. Camel racing not only celebrates the region’s culture, but also promotes values such as honour and good sportsmanship.