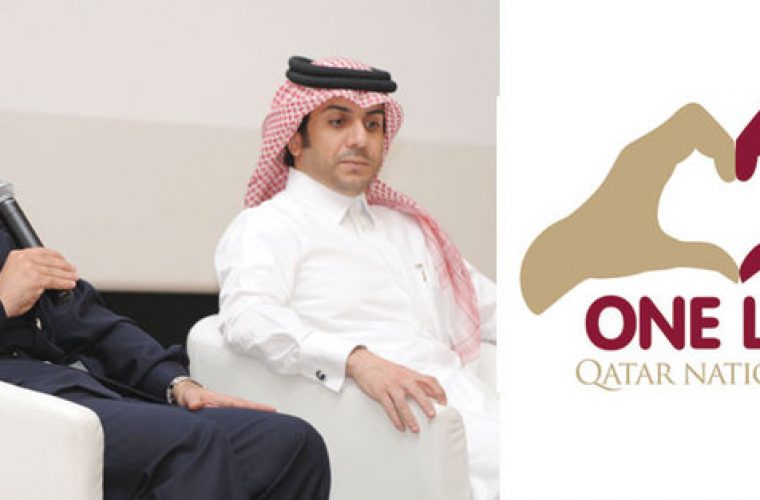 The Qatar National Day celebrations will be held under the ‘One Love’ theme this year, highlighting the bond shared between Qataris and expatriates who have made Qatar their home away from home. The ‘One Love’ logo was unveiled yesterday by the Committee of Associated Programmes for Qatar National Day Celebrations. In addition to the events planned in Doha, special events will also be organised Industrial Area’s Westend Park, Al Wakrah stadium, Al Rayyan stadium and Al Khor stadium. This was announced at a press conference organised by the Ministry of Interior’s Public Relations department and attended by Col Abdullah Khalifa al-Muftah, director of MoI’s Public Relations Department and committee member Mana Ibrahim al-Mana. Col al-Muftah acknowledged the contributions of all expatriate communities in Qatar, who celebrate the National Day with zeal and respect. He said the cultural, entertainment and sports events were being held to provide not only entertainment on the country’s big day, but also to promote a peaceful atmosphere for all communities. Al-Mana said their aim was to reach out to all communities and hold events that not only entertain, but also raise awareness about key issues such as health, etc. Explaining the logo that shows two hands forming a heart, he said that one of the hands denotes Qatari citizens while the other represents expatriates, demonstrating how by joining hands communities can spread love and friendship among each other. The officials said that arrangements were also being made to telecast the fireworks display at Doha Corniche on National Day on December 18 to the four venues outside of Doha. The events will be open to residents and workers alike. Apart from cultural programmes, there will be sports activities and matches at each venue. At the Westend Park, cultural shows by Indian and Sri Lankan community members will be performed. The Westend cricket stadium will host a match between Indian, Pakistani, Sri Lankan and Bangladesh community members on December 18, which will be managed by Lagan Cricket Club. Winners and runner-up of the cricket tournament will be given QR10,000 and QR5,000, respectively. At Al-Wakrah stadium, Pakistani and Bangladeshi communities will perform their cultural shows. Football and basketball matches will also be held, where winners will be awarded a prize of QR10,000 and QR5,000, respectively. At Al Rayyan indoor stadium, Filipino, Malaysian and Indonesian community members will give performances, while at Al Khor Sports Stadium, Nepalese expats and Al Khor community members will stage shows. On December 18, the national anthem will be played at 8am followed by a parade of schoolchildren at each location, which then will be followed by the various activities till 10pm. Apart from entertainment, each venue will also provide different services to the public. Blood sugar levels checks will be done at all venues in co-operation with the Supreme Council of Health, Hamad Medical Corporation, MoI’s Medical Services Department, Qatar Red Crescent and many private clinics. Blood donation camps will also be organised at Westend Park and Al Rayyan sports stadium. Each venue will also have dining and praying areas, restaurants and emergency medical services. Sixteen schools will be participating in the cultural programmes at all the venues, including the MES Indian school, Pak Shama, Sri Lankan School, Nobel International School, Birla Public School, Ideal Indian School, Shantiniketan Indian School, Philippines School Doha, Philippines International School, Scholars International School, Doha Modern Indian School, Pakistan Education Centre, Bangladesh MHM School, Bhavans Public School, DPS-MIS Indian School and Bright Future Pakistani International School. The school winning the first prize will get a reward of QR10,000; second prize QR7,000 and third prize QR5,000. http://www.gulf-times.com/qatar/178/details/373756/%E2%80%98one-love%E2%80%99-theme-for-national-day-celebrations