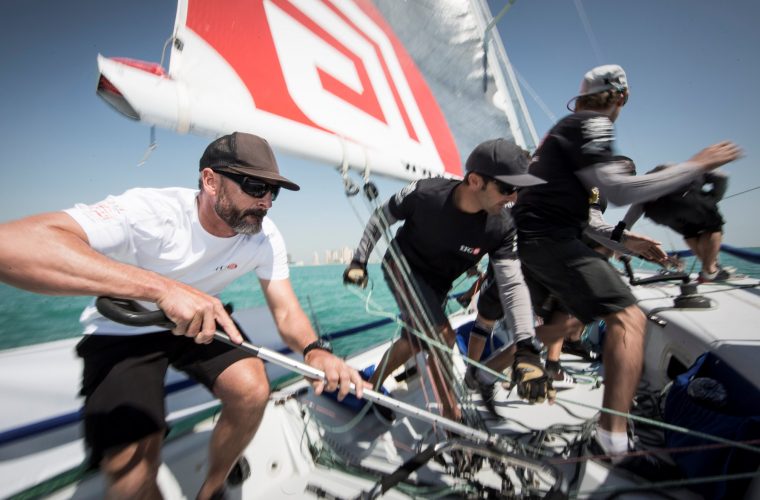 Doha – February 22nd 2016: The nine international teams vying for this year's EFG Sailing Arabia – The Tour title today set sail for Oman on the longest and toughest of the event's five legs. The 280 nautical mile stage from Qatari capital Doha to Khasab on the tip of Oman's Musandam peninsula will see the crews spend three days and two nights at sea as they do battle offshore for the third time.

For the Omani sailors competing in the 730nm adventure around the Persian Gulf the leg means a return to home waters, something they will be looking to use to their advantage. Abdullaziz Al Obidani, from Omani boat Al Mouj, Muscat, said his crew were hoping to make their fellow countrymen proud by winning the testing leg. “It feels great to be heading back home to Oman and we're going to fight to be at the front,” he said.

Al Mouj, Muscat went into today's leg start on a high after finishing second in yesterday's Doha In-Port Race series. They scored an impressive 5, 3, 1 in the three races held off the entrance to The Pearl-Qatar in stunning conditions. The team, skippered by French sailor Nico Lunven, came runner up only to overall race leader Sidney Gavignet and EFG Bank Monaco, with British crew Team Averda completing the podium.

“We feel very proud to be flying the Omani flag and we're also proud of what we've achieved so far in this race. It is going to be a tough leg but we want to win it for our friends, family, fans and the Omani people.”

The Doha In-Port Race series was the third and final inshore racing element of this year's tour, during which teams pick up valuable points in quick races around a short course.

A strong set of results from Fahad Al Hasni's Renaissance Services saw them solidify their position of third in the overall leaderboard behind EFG and Averda. The in-port racing was also an opportunity for the teams to showcase the intense racing to guests. Khamis Al Muqeemi from Oman Airports Company joined Dee Caffari's all-woman team Oman Airports-Al Thuraya while Dutch team TU Delft Challenge had Her Excellency Yvette Burghgraef-van Eechoud, Dutch Ambassador to Qatar, watch their performance closely from the Pearl Qatar marina. Race organisers had expected leg 3 to be downwind in prevailing westerly winds, allowing the teams to hoist their huge spinnakers and reach Khasab in good time.

But the forecast is now for a light easterly breeze meaning the crews will have to zig zag upwind for the majority of the stage adding extra time to the already painfully long leg.

Dee Caffari, the first and only woman ever to sail solo around the world non stop both with and against the prevailing winds, is hoping she can use her experience to get the best from her all-woman team Oman Airports-Al Thuraya.

“Leg 3 is going to be the real test for us,” said Caffari, whose team finished seventh in the Doha In-Port Race series. “We have been really good at the start of the previous offshore legs but we haven't been able to sustain that. We will be trying to stay with the fleet and get involved. The incentive for the Omani girls is that they are sailing home, so I am hoping that will speed us up a little bit. The leg is looking like it is going to be upwind again so weight on the rail will be vital. That means little opportunity to go down below to sleep. This leg is a marathon not a sprint so it's going to be about keeping the team going all the way to the end.”

The leading boats are expected to reach Khasab on Wednesday and will have little time to recover before the start of leg 4 to Sohar on Thursday. The final leg of EFG Sailing Arabia – The Tour will see the fleet depart from Sohar on Sunday bound for the finish in Muscat.