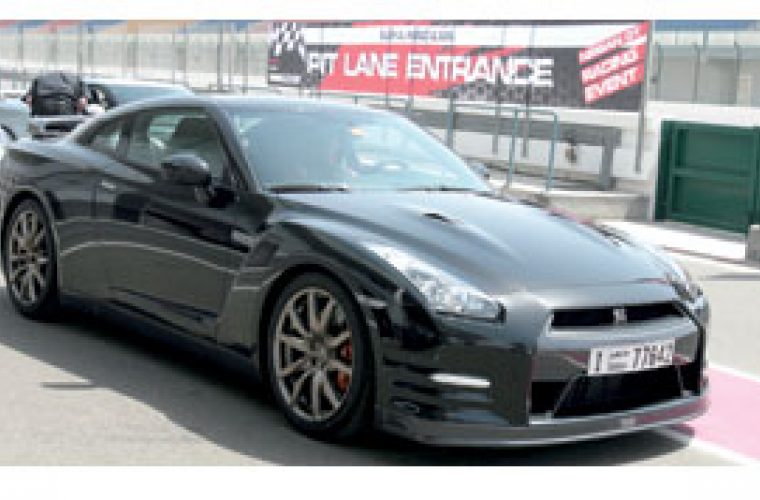 GT1 racing team, Sumo Power GT yesterday brought the Nissan GT-R race car to the Losail International Circuit, where they tested the skills of their driving team and also offered guests a chance to experience the new 2012 GT-R VVIP edition on the track. A team of racing drivers from Nissan took part in the event, organised in conjunction with Saleh Al Hamed Al Mana company, which saw them display the power of one of only five of these race cars in the world. The noise of the powerful race vehicle speeding around the track was something special, and created an exciting atmosphere in the garage where guests awaited their turn in the road cars. The Sumo team participate in the FIA GT1 World Championship, and drivers Michael Krumm, Lucas Luhr, Peter Dumbreck and Jamie Campbell-Walter were in Qatar yesterday to take guests around the track. The road car is no slouch, capable of going from 0-100km/h in 2.9 seconds, and reaching a top speed of 315km/h, and those who experienced a lap of the track were left in no doubt of its high performance. Chairman of Al Mana, Hisham al-Mana said: “As one of the most iconic race cars of our time, the Nissan GT-R has a racing pedigree dating back four decades.” “The name Nissan GT-R alone commands respect,” he said, adding “to be able to bring the Sumo Power GT team to Doha to show the power of these legendary cars is a great honour for us, and we are very proud to be able to share this event with our most valued guests and clients”. “The new edition has great resonance with Qatar’s elite circle and sports car enthusiasts alike,” he noted “and we are very excited to offer the opportunity to our clients to pre-order and customise this incredible sports vehicle”. The car is available at a starting price of around QR790,000, making it significantly less expensive than its competitors, who it has continued to outperform. Bespoke cars always prove to be popular in Qatar, and customers are able to choose certain features of this car, including the interior colours and other features such as the Bose speaker system. Known as the Egoist in the European and Japanese markets, Nissan decided to call the car the VVIP in the Gulf area because of the model’s popularity in the past here, and the significance of this market to the company. Sumo Power GT Team principal, Andy Barnes stated that his team had been impressed not only by the Losail circuit, but also with the reception they received in Qatar.